Is there such thing as a horse that’s too easy? 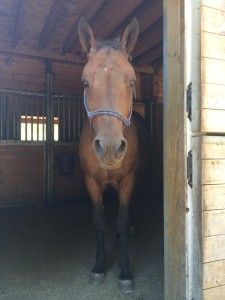 Owen is always teaching me things, which makes interacting with him such a joyful experience. His smarts and his willingness make our sessions a lot of fun. He takes most everything he’s asked to do in stride…he always tries and he hardly ever overreacts. Which led me, a few days ago, to make a pretty big mistake with him…

It started with a horsefly. This sucker was as big as a baseball and as mean as the day was blisteringly hot. It attacked Owen and Jay in the pasture, and the two horses were extremely upset about this thing that would not stop chasing and biting them. Since Owen doesn’t have a tail, I worry about him a lot when it comes to evil biting insects. So I decided it would be a good idea to put some high octane fly spray on him to hopefully provide him some relief.

Owen’s made great progress over the past few months, but in retrospect, I understand now that he was no where near ready to be introduced to Mr Spray Bottle. It only took a couple squirts for me to figure out that he was having none of it. But what took a lot longer to dawn on me was that Owen was seriously offended by the fact that I even tried. For the next three days, he would have nothing whatsoever to do with me. Not only could I not halter him, I could not even touch him! It was as if all the work that we had done has simply vanished, and the feral stallion who showed up here last spring was back. Even the look in his eyes had changed. The horse that had become so accepting of my friendship was gone, and in his place was this creature who did not want me anywhere near him. It was baffling, and a little bit heartbreaking!

Fortunately, as the heat wave started to ebb, so did Owen’s standoffishness. By last night, he was again allowing himself to be petted, and by this morning, I was able to put a halter on him again. I think our relationship is more or less back to normal. But it was a huge lesson for me to never assume that just because Owen is good about most things that he will be good about everything. It sounds dumb, but it just did not occur to me that he might not accept the spray bottle right away. It was a good reminder that one should never take a horse’s good nature for granted. Owen will get past this particular gaffe, and I think he will forgive me, but hopefully I won’t forget to take things slow and never make careless assumptions about what he can and can’t handle.