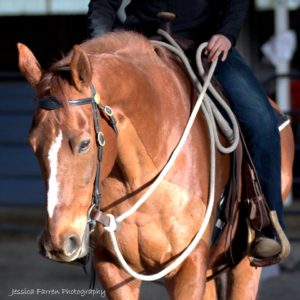 (as reported by Ben’s regular rider, Lisa Garr)
In December of 2015, Ben and I participated in a clinic at SAFE with trainer Joel Conner and I was just hoping he would stay calm enough to participate safely. Well, he blew me away then with his focus, willingness, and trust, and in April we once again joined Joel for a clinic… and Ben was a STAR!

Since December we had been focusing on moving up and down through transitions calmly off of the seat, from walk to trot and back down again, stopping off of one rein, finding a soft feel, moving his body in a straight(ish) manner, and really just continuing to help Ben understand that when he is asked to bring his energy up a little and move at a slightly faster pace, that does not necessarily mean RUN. Ben had been described at one point the previous summer (2015) as a bolter… but really he just had never been taught to listen; he had just been taught to GO. He was then taught to GO and JUMP but then STOP and HOLD YOUR HEAD HERE but still GO but NOT TOO FAST and KEEP YOUR HIP THERE and HEAD HERE and…. well, I’M confused… and so was he. It felt like he was with me (mentally) until I asked for a trot, and he would stay with me for a bit but then “check out”… his brain turned off, his feet got to moving, and goodbye Ben, hello Babe Hoolihan the Racehorse! He was imbalanced (hip out, shoulder in, head out and often tipped slightly… he rather resembled Gumby, actually) at the trot, but especially in the canter, even without a rider, and didn’t know how to coordinate himself.

I was already so proud of the progress Ben had made by the time Joel arrived for April’s clinic, I couldn’t wait to see how much more he could accomplish with his guidance. Throughout the weekend, Ben was focused, relaxed, incredibly willing and soft, and picking up new material like crazy. At the end of the riding portion each day, Joel had each horse-and-rider pair move out and work on something specific to their training needs. For Ben, it was moving up and down off of the seat (as opposed to pressure from the reins & bit) and staying checked-in, mentally. Day one was OK – The rest of the class was gathered in the center of the arena and we were working around the outside, trying to trot at a good pace without jumping into the canter. In the end, when he DID hook back on and come down, it was a huge emotional release for both of us and a HUGE step forward in our work together. On the second day at this time, we DID canter… and then some. All while receiving instruction and support from Joel, it was the same idea as day one but at Ben’s “Trigger Pace”– at which he was taught to GO and GO and GO and GO (regardless of form or balance) until someone hauled on his face to stop him. So, he ran. I quieted my seat, pet him constantly, and kept him out to the wall (again, the rest of the group was gathered in the center of the arena), while trying to help him stay balanced. Did I mention he ran? Maybe 15 full laps around the arena, but at one point his ears flipped forward (he “checked back in”), his poll straightened, and he came down to a fast trot… and as he was only given support and continued quiet praise, he slowed through the trot, then the walk, and when he finally stopped altogether, he sighed, licked, chewed, sighed some more, and his entire body relaxed. It’s difficult to describe, but his entire FEEL changed in that moment. This would take a LOT of continued work, but with Joel’s guidance, we made huge leap in teaching Ben to trust that he would be supported and treated fairly and that he did not need to protect himself by mentally checking out. What an amazing horse this guy is! 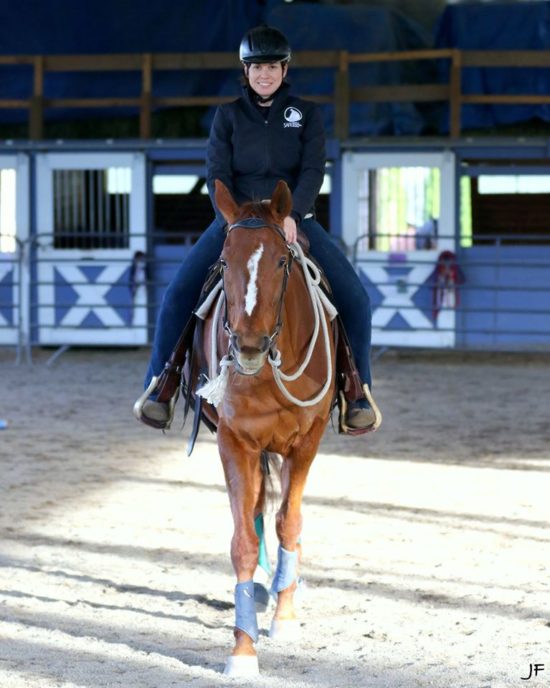 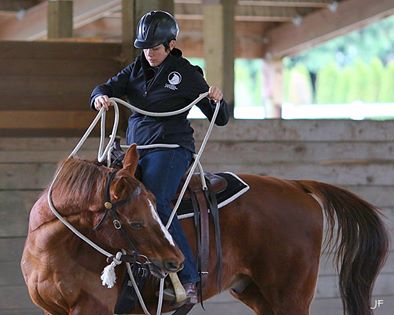 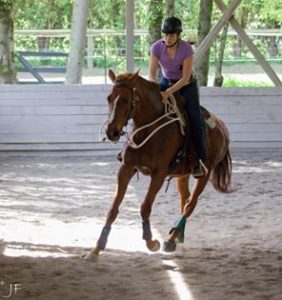 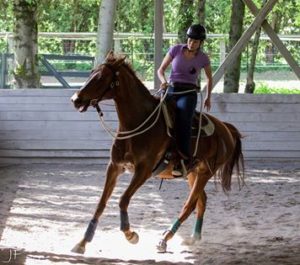