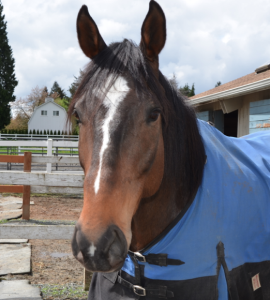 Such an innocent face!

Kai has spent the past few months out on trial with a potential adopter…and we are delighted to announce that Debbie G of Bellevue WA has decided to go forward with the adoption. Kai resides at a beautiful farm on Bridle Trails State Park and Debbie takes him out on the trails nearly every day. Kai apparently loves trail riding and has been doing great with it.

Debbie is also planning to do low-level eventing and hopefully even field hunting with him…but Kai has a lot to learn about self-control before that can happen. He’s already had some jump training, which he also seems to love, and Debbie tells us that she had a great lesson on him jumping 2′9″.

Debbie says that Kai seems comfortable and happy in his new home. “He’s like a lap dog with me in his paddock,” she tells us. “He’s always ready for a hug. Such a sweet boy!”