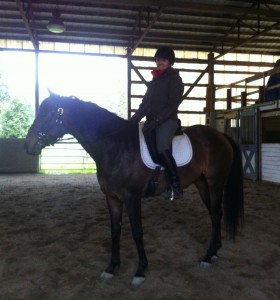 SAFE Trainer Brittney Stewart has had the opportunity to work with Kai a few times now, and she’s pretty pleased with what she’s seen from him. He’s very green, of course, but unlike many of the off-the-track thoroughbreds she’s ridden, she finds that Kai listens to her seat and outside aids, so he obviously got a good education from his first trainer, Cam Reeves. Cam was also successful in teaching him not to bolt, and while Brittney isn’t giving him opportunities to try that with her, she did note that during a recent ride, when a tarp was snapping outside the arena, Kai really “tried to hold it together” and was a good boy about the whole thing. On their first session together, he gave her some grief about bridling, but he’s since given up that behavior as well.

Here’s a video from today’s ride on Kai. Brittney said that this was her last ride of the day, and after riding 7 other horses, Kai knew she was tired and made her work a bit harder than she wanted to, but overall he was a good boy and didn’t do anything silly.