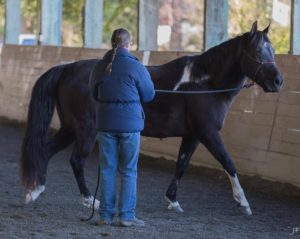 When King arrived at Safe Harbor, he was frightened of every noise and every person who approached him. Our efforts to gentle him and gain his trust are really showing and now you can hardly tell he is the same jumpy horse that came to us. Now when you approach his stall he is calm and inquisitive. He loves head rubs and has become relaxed in his stall and to work around. King has also gotten a lot better for the farrier and we have no problems grooming him or getting his blanket on and off. He had some time off during the move to our new property and for the most part “vacationed” well. His sensitivities to the flag showed up again during his recent clinic with Joel Conner but over all he was much more connected to his volunteer handler. After the clinic was finish King loaded easily into the trailer and went home with Joel to begin his training as a riding horse. All reports have been great. He traveled well, settled into his paddock and began work with Joel without an issues.

Volunteer rider Ann worked with King in the clinic. Here is what she had to say about her experience:

I really enjoyed working with King in the groundwork session. He is a sweet and sensitive horse. I worked with him at the November clinic and he has made some good progress since then. He is still anxious about the flag and is not real comfortable being worked from his off side. He is very light and responsive in all the groundwork exercises. He sticks right with me while leading and is easy to send out on a circle in either direction. I did the exercises without the flag at first and kept everything calm and slow. Then I added the flag and he became quite anxious and was rushing through the exercises trying to keep the flag from touching him. I worked on sending him past me in a half circle petting him with the flag several times as he went past. He was able to settle down and accept the flag touching him before too long. He just needs a lot more work with the flag. King stays focused on what I am asking and follows a feel well. He is willing and has a lot of try. King is going to make a really nice horse for someone.