As we told you back in June, after months of rehabilitation and care, Logan did not seem to be fully recovering from the neglect he suffered at the hands of his previous owner. We made the decision to move him out to a foster home where he could enjoy the summer in a large, lovely pasture and watch him carefully for any signs of further decline. It would be a blessing if he stayed comfortable and happy, but if he began to show any signs of discomfort, pain, or a deteriorating quality of life, we were prepared to let him go quickly and peacefully. 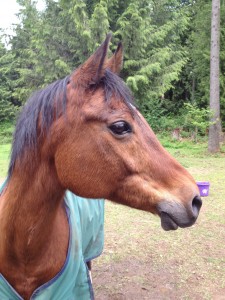 It was a good and peaceful summer for Logan, but a few days ago, we got a call from his foster mom saying that he had injured himself and was three-legged lame. Brittney went out and found that he had developed a painful-looking lump just about the fetlock on his left hind leg. She gave him something for the pain, and treated and wrapped the leg to support it, and gave him some pain reliever, and by the next morning, he was walking slightly better on it again. But that improvement was short lived as he became significantly off on his right front leg. It was clear that he was in pain and having trouble moving. Logan has been notably unstable in his hind end since we took him in last December, so we were very concerned that with this new injury, he could fall and hurt himself further. The decision was made that the time to let him go was now, before things got any worse for him.

Surrounded by those who loved and cared for him, Logan was given his fill of carrots, apples, and horse treats; he was petted and scratched in all the best places; and he was told over and over what a good boy he was and how much he was loved. It was a very grey dreary day, but when the vet asked, “Are you ready?” the sun slipped out from behind the clouds to shine on Logan’s face, one last time. His passing was peaceful and quiet.

We are so incredibly grateful to Logan’s foster mom, Jackie, who took him in at the start of the summer knowing full well that this sad day was coming. She has taken such loving care of this horse, and made the last chapter of his life into one of peace, safety, and serenity. It takes a very special person to offer their heart and home to a horse that doesn’t have much time left, but Jackie did so gladly. For that, we thank her, and hope that if she ever catches a glimpse of Logan’s spirit running through the trees, it will bring her a smile, knowing that she made a huge difference for a horse in need.