Turns out all the trail riding that Lola & Brittney have been doing lately was in preparation for a big adventure: a four-day trip to Cle Elum in Eastern Washington!

DAY ONE: We meet up at SAFE Harbor Stables to pick up Lola. Her guests on this adventure are gigantic warmblood Odin, ridden by Darby Stewart, and gigantic OTTB Chance, ridden by SAFE ED Bonnie Hammond. Most little five year old Araloosas would be intimated by a pair of tall, handsome geldings like Odin and Chance, but not our Lola. She calmly establishes herself as the leader of the pack, and away we go to Cle Elum!

We arrive at the Washington State Horse Park which will be our home base for the next three nights. We quickly find the stalls we’ve reserved and are delighted by all the considerate little conveniences provided for us by the park, including wash racks with rubberized footing and cross ties; muck carts with rakes & shovels; fresh bedding for the stalls; and even mounting blocks to use! After everyone is unloaded and settled in, we saddle up for an easy walk around the park to stretch our legs and give our horses a chance to get acquainted. Then it’s early to bed in order to be ready for tomorrow’s first big adventure!

DAY TWO: The horses are loaded up and we’re off to Salmon La Sac to ride the Waptus River trail. At the trail head, Lola was saddled up in her Dressage saddle and then outfitted with packs in front and back. She also donned a full set of donated Easyboots, including a sassy red pair of boots behind. The trail started high above the Waptus River, and the combination of the river noise and another nearby group of horses caused all three of our steeds to lose their minds temporarily, but after a moment to regroup, we started off down the trail with Chance leading the way, Odin charging up behind him, and Lola bringing up the rear. The trail winds up and down rocky bluffs and through the forest, and some of the downhill stretches were quite challenging for horses the size of Chance and Odin. Lola, however, scampered up and down the hills like a surefooted mountain goat. It was only when we came to our first stream crossing that she expressed some doubt about going forward…and it was then that we realized that one of Odin’s Easyboots was broken and we had to turn around. The return trip was a lot more downhill and there were many places where the horses were walking over large rocks and boulders, but Lola was completely unfazed by any of this.We were disappointed that we couldn’t have gone farther, but all in all, it was a good ride and all the horses did very well.

DAY THREE: Today we headed off to Teanaway where we planned to do a ride that included 26 river crossings, just to give Lola the opportunity to practice her water skills. Upon reaching the first crossing, however, we realized that we might have been overconfident in choosing this particular trail. Brittney dismounted to lead Lola across first, and to her credit, Lola did cross the river in hand, but the large, slippery rocks under the fast moving water were quite a bit more of a challenge that what we were looking for! So we decided to change plans and ride up Yellow Hill instead. This involved an elevation gain of 2700 ft, but once we reached the top, the views were absolutely breathtaking! The last part of the trail was so steep that the horses had to practically bunny-hop their way up some of the inclines. We took a breather at the top to eat lunch and let the horses rest (and replace one of Lola’s Easyboots!) and then we walked the steepest bit back down in hand, just to be safe. Once we were back in the flatlands and headed to the trailer, Lola got her second wind and wanted to go for a few more miles! She’s amazing, and we’re wondering if perhaps she might like to try some endurance rides!

DAY FOUR: Our last day before heading home, and we decided that a nice easy ride was in order, so we packed up and said goodbye to the Washington Horse Park, and headed out to ride a portion of the Iron Horse trail. We did an easy eight mile ride along the flat, scenic trail that used to be a railroad grade. The geldings seemed pretty glad to take it easy after yesterday’s ride, but Lola was raring to go with lots of energy and a definite spring in her step. We had an exciting encounter with a small group of cattle that were on the trail, but all three horses handled it pretty well given a chance to have a long look at the cows and with lots of encouragement from their riders. After the ride, we all hopped in the trailer and headed home. 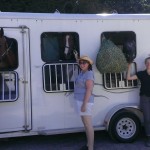 DAY ONE: Darby, Bonnie, and Brittney ready to roll 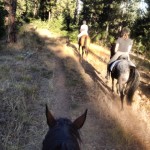 DAY ONE: a quick easy ride at the Washington State Horse Park 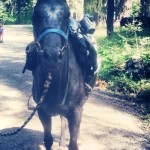 DAY TWO: Loaded up for the Waptus River Trail 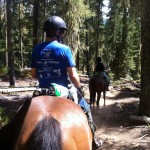 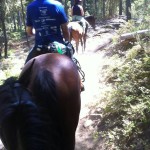 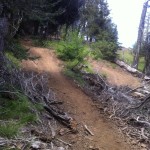 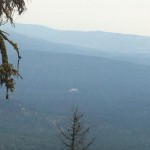 DAY THREE: the view from above 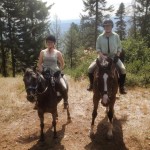 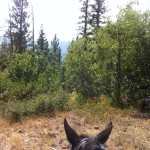 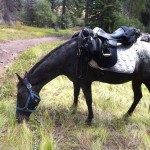 DAY THREE: Lola enjoys a snack at the top of Yellow Hill 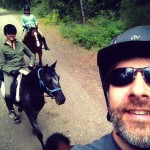 DAY FOUR: An easy ride on the Iron Horse Trail 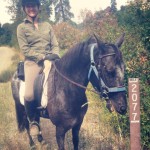 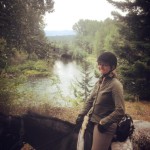 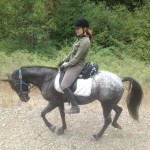 DAY FOUR: …and still enough energy to be sassy! 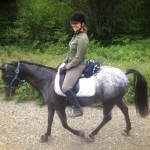 DAY FOUR: Brittney says, you just have to laugh!