King is a 9 year old Tennessee Walking Horse cross gelding who was seized from his owner by Pierce Co Animal Control. King, another horse, and several dogs were discovered living tied to trees and starving, on a wooded property where their owner was squatting. The horses were seized and held in Animal Control custody for nearly 7 months while their owner petitioned the court for their return. Once ownership was signed over to the county, King was offered for adoption and quickly placed; however his new owners returned him within a month, saying that he displayed aggressive behavior. Knowing that SAFE has a great training program for troubled horses, PCAC turned to us for help. We agreed to come meet the horse and assess him.

The horse we met was a handsome fellow, big bodied and jet black expect for his white legs and one big area over his left shoulder. He greeted us with cautious optimism and allowed himself to be haltered. Working him in hand, he seemed pretty uneducated but quite willing to yield when asked. The true test, we decided, would be loading him into our trailer. He looked doubtfully at our trailer ramp, but with a few words of encouragement, he walked right up and in without a fuss. He was signed over to us, and we took him home!

King has settled in at Safe Harbor quite easily, and while he’s interested in the horses that surround him, he’s calm and quiet most of the time. But we know full well that just because he’s behaving himself now, that doesn’t mean that the behavior that his adopters saw is not in there somewhere! So we are proceeding with caution. Once he has passed quarantine, we’ll be able to start working with him on the ground to see what we’ve got. This is a horse that we hope will benefit greatly from SAFE’s training program.

Photos, just off the trailer: 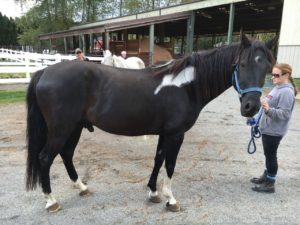 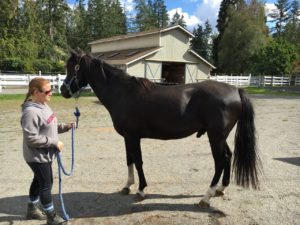 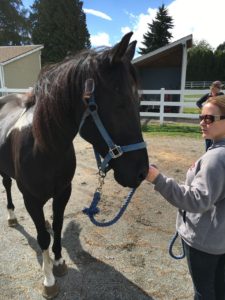