Mason is a 15 year old Thoroughbred gelding who has come to SAFE because his owners could no longer care for him. He’s a nice fellow who is very friendly and willing, but whether he can be safely ridden is yet to be determined. As we start to piece together his past, we are discovering that life has not been easy for Mason.

We know he’s been ridden in the past, because unfortunately he has spur marks and scarring to prove it. Eight years ago, he was sold as a riding horse “for an experienced rider”. The person who bought him got bucked off, and then apparently turned him out to pasture for the next seven years. He was then given away to a couple who put him into full time training until the point that they could no longer afford to pay his board & training bills. We’ve been given conflicting reports on how successful his year of training was, so we have no choice but to approach Mason as a horse that has not been ridden in at least eight years. First and foremost, we have to keep our people safe.

As luck would have it, trainer Joel Conner arrives tomorrow for a clinic at SAFE so he will undoubtedly have the opportunity to work with Mason and assess him.

Mason is in good weight, but he has a very high worm load, so his belly appears distended. He’s up to date on shots and teeth, and it appears he’s been getting his feet trimmed on a regular basis but is overdue. His body is covered with scratches and scrapes and scars, which is very puzzling as no one at his barn knew how he’d gotten so banged up. (He’s got a stall and a run here at SHS and he hasn’t exhibited any weird behavior in his stall so far, so it remains a mystery.) There is also something wrong with his left eye. He’s overly sensitive on that side, and overreacts to any attempt to touch his face on that side. The eye itself does appear swollen, and his vet records reveal that it has been examined and flushed after excess discharge was seen. We learned a lot about eye problems thanks to Anakin, so we will likely have Mason’s eye pressure tested to see if uveitis is present. There is no cloudiness in the eye that we can see, but something is definitely bothering him.

Mason is supposedly a registered Thoroughbred, but he does not appear to have been raced because he doesn’t have a lip tattoo. His registered name is Mr P’s Pace Halo, but we haven’t been able to confirm that through official channels, just Thoroughbred Pedigree Query, which is not always correct.

Here are the photos taken as he arrived at Safe Harbor: 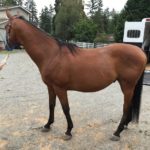 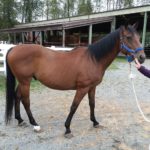 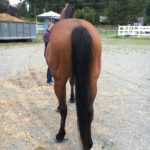 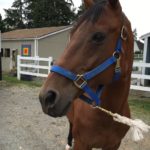 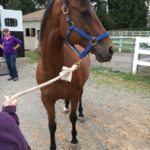 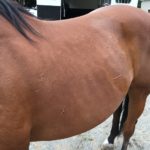