We have an old friend back among the herd at SAFE Harbor…the Arabian gelding El Johar Jamaal, formerly known as Oscar the Grouch, currently known as Oscar the Sweetie Pie. SAFE has elected to allow Oscar’s owner to return him to us to be rehomed, as we strongly feel that taking him back is in the best interest of everyone involved. We are currently reassessing Oscar under saddle, and hope to have him ready for re-adoption very soon. 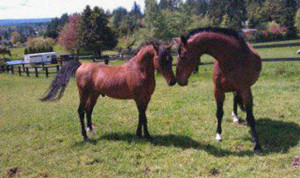 Oscar’s first friend as a gelding was Faerplay

Oscar was one of 16 horses seized from a breeding establishment by Pierce County Animal Control in late 2011. He was signed over to SAFE along with four other Arabs from that seizure in Feb 2012. Upon meeting Oscar, we were extremely worried about what we had just committed to by taking him. He was a 15 year old breeding stallion with minimal handling due to neglect, and he was about as wild and unruly as you might expect a horse with his background to be. To our surprise and delight, Oscar’s rehabilitation went splendidly. Gelding him was the first step, then basic socialization by Dr Hannah at NWESC followed while he recovered from surgery. Once he was fully healed, we sent him into training with Andrea Lucianna, where he learned to coexist peacefully with other horses (thanks to Faerplay!) and proceeded to excel in his lessons under saddle. He graduated from Andrea’s training program with high marks, and moved into the barn of trainer Melonie Rainey, who fostered him for several months and donated his ongoing training. Oscar’s remarkable turnaround continued under Melonie’s guidance, and she found that this former stud horse was gentle enough to be groomed by children and safe enough to be ridden by beginner riders. 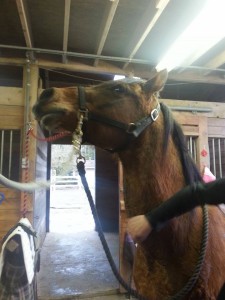 We’ve been enjoying his return to SAFE Harbor. Terry had this to say about him last week: “Oscar loves neck and back scratches! He is such a ham. I can’t wait to start riding him next week. Friday he took the bridle and lunging with side reins no problem. Such a cute mover!” We’ll have more updates for everyone as we continue to work with Oscar, but for now we are feeling very bright about Oscar’s future.