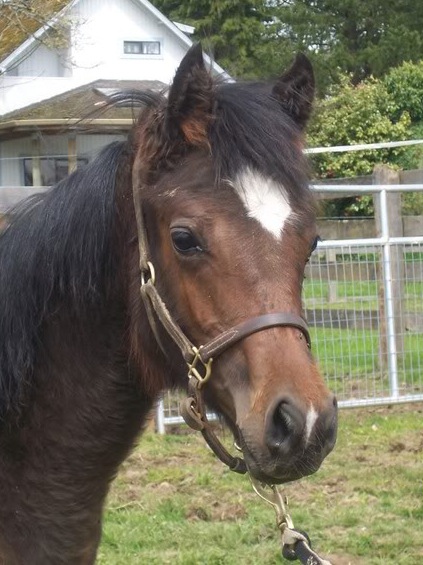 Ella was one of 10 horses seized by Snohomish County Animal Control in late Feb 2008. She was about 6 months old when she and her dam Jasmine were rescued. Ella nearly died due to the severe emaciation she suffered at the hands of her owner and breeder. But with time, she became stronger. By the end of April she was acting like a normal foal, running circles around her dam, bucking, playing.

So it was a terrible shock to find her down in her stall one morning. Over the next few days, she would eat, and drink, but she would not even try to get up, and if you helped her to her feet, she would just hang limply and refuse to stand. It was as if she had just given up, and decided she was going to die. Three days later, on May 8, 2008, at a vet’s clinic, she passed away with no struggle, no sign of pain. A necropsy revealed that she had massive parasite damage to all her internal organs, especially her heart.

Ella’s death was a tremendous blow to all of us at SAFE. While Ella could not be saved, justice was eventually served in her case, as her abuser was sentenced to a year in prison after pleading guilty to multiple counts of felony animal cruelty.