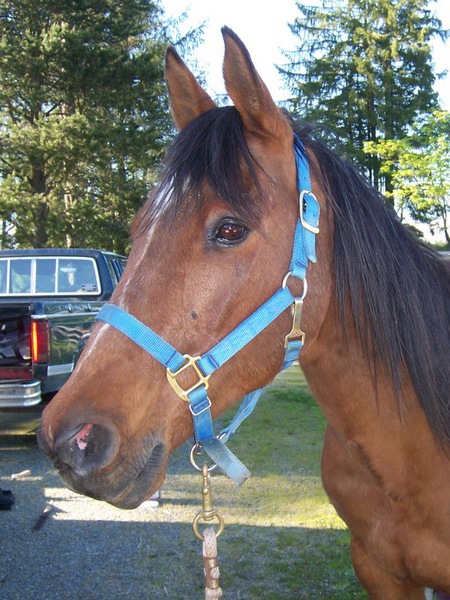 Bo was a thin bay gelding with a sweet but sad face, bought by SAFE at the Enumclaw Auction in April 2007. SAFE paid $150 for Bo, bidding only against the kill buyer to take him home. Bo was in his mid-twenties, underweight, with a poor coat and overgrown, cracked hooves, one with a shoe still hanging on by a single nail.

Within days of bringing Bo home, it became obvious that Bo was not right in his hind end. He often held his right hind way off to the side, and when he wanted to change direction, he would simply pivot around the leg leaving a drag mark in the dirt. When he was evaluated by our vet, Dr. Hannah Evergreen, it was obvious that Bo had a severe and old stifle injury. More telling than his odd stance was his elevated heart rate despite the appearance of being calm, even depressed. This told Dr. Hannah that Bo was in a significant amount of pain. Therefore, the decision was made to release Bo from his pain and let him go.

Losing Bo was a sad disappointment, but we take comfort in the fact that Bo never had to face the horror and cruelty of the transport and slaughter process.