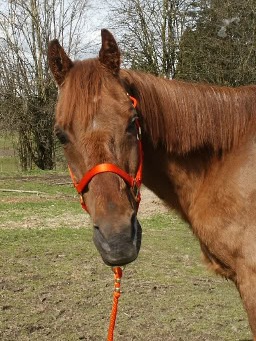 Pie and Isabella were surrendered to SAFE by their owner in 2007, terribly thin and neglected. Pie was approximately 30 years old, a sweet and friendly gentleman who thrived with good care and good food. He was much loved by his foster caretakers for his outgoing personality and his remarkable joy for life. Pie received a great deal of veterinary care during his time at SAFE, and blood testing revealed that he was suffering from an aggressive form of lymphoma.

On May 10, 2008, Pie awoke and ate his breakfast with his usual gusto, and then laid down in the grass for his afternoon nap. When his foster mom checked on him a while later, he was gone. He simply went to sleep and didn’t wake up, there was no sign of any struggle at all.

We were deeply saddened by his passing, but also relieved that he never suffered, that he felt great right up until the end, and he went so peacefully. We never had to go through watching him decline and every day judging his quality of life and trying to determine when the right time was. In a way, we felt that Pie saved us from having to make a hard decision, which seemed like something that he would have been kind enough to do. We are so lucky to have known him.