Rowan is approximately 12 years old, all black except for a big star and a snip. She is extremely emaciated (BCS 1), so to prevent refeeding syndrome, she is being fed a pound of alfalfa every four hours round the clock. The amount of hay Rowan is receiving will be slowly increased over the next 3 weeks as she moves closer to her target weight. She was seen by Dr Renner after arriving at SAFE, who examined Rowan, gave us precise feeding instructions, and took a blood sample to be tested. The blood test came back normal, which was a relief since starvation can be extremely damaging to a horse’s internal organs. We are optimistic that we will be able to manage her care through this crucial period, and that Rowan will start putting weight back on very soon. 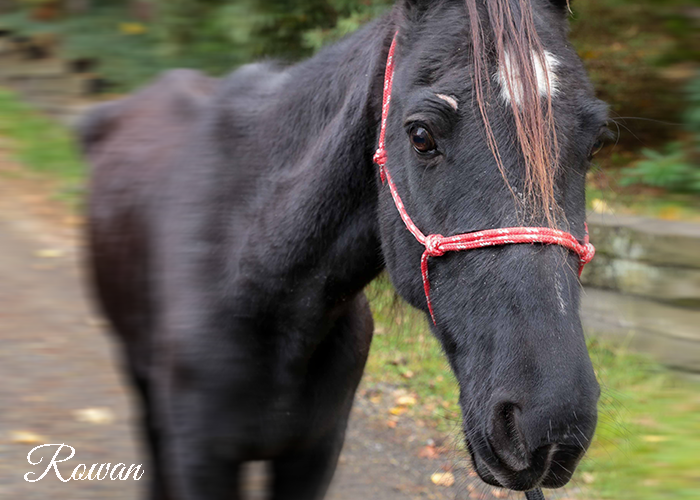 This is Not Over

Just over a week ago, we took in a timid, lonely, emaciated mare with no name. A day later, she had a new outlook on life: she had a new name, a comfy bed, high quality food, veterinary care, and people who loved her, who were more than ready to be part of the amazing transformation she would undergo.

On Tuesday night, just a week after arriving at SAFE, our nightcheck volunteer discovered Rowan down in her stall and called for help. It appeared that she had laid down a little too close to the wall and was unable to get back up, what we call being cast. She was very calm and quiet, and seemed perfectly happy to get some assistance. Using soft ropes around her legs, we were able to gently flip her over onto her other side. Once clear of the wall, we asked her to stand up. She gave it a decent try, but her hind legs didn’t support her and she couldn’t make it all the way up. Assuming she needed to rest a while, we left her lying quietly in her stall and continued to monitor her from the stall camera. Our Herd Health Manager Melinda had spoken with Dr. Lewis at Rainland Farm Equine Clinic, and her feeling was that she’d probably get up on her own if we left her in peace.

Rowan continued to rest quietly, sometimes in a sternal position and sometimes flat out on her side. At 1 am, Herd Health Manager Melinda arrived at the barn to be with her patient. Melinda was concerned that Rowan was now too close to the other wall, so she and I were able to pull her neck and shoulders out from the wall at enough of an angle to clear her legs completely. Melinda took vital signs and pulled a blood sample, and then drove to Rainland Farm Equine Clinic to meet Dr. Lewis who ran tests on it. She then returned to SAFE, where she and I sat with Rowan and waited. At this point, Rowan had been laying flat out on her side for some time. Periodically, she would paddle her legs, but she was unable to lift her body up into a sternal position. She could lift her head quite well though, and she took advantage of this mobility to look at whichever of us was sitting behind her, and to ask the other for another handful of alfalfa. She was calm and friendly and really quite adorable. She just couldn’t get back up.

Dr. Lewis arrived and told us that bloodwork hadn’t shown anything unusual. But there was a grim reality that we had face up to. Rowan had been starved to a Body Condition Score of 1. And although we were doing absolutely everything that anyone could do for a horse in that condition, the fact is that in about 25% of cases, horse who have been that badly neglected are going to die.

It’s not in our nature to give up. Melinda and Terry had been in contact with WASART all night, and they were on standby to come help Rowan back to her feet. Once again, it fell to poor Dr. Lewis to help us face the truth: Rowan was too weak to remain standing. Lift to her feet…and she would just fall down again. A hoist and sling can help a horse get to a standing position, but once standing, she would still have to hold herself up on her own four legs…and she was just too weak.

This little horse was a fighter, and we wanted to give her every chance possible to defeat what had happened to her. Dr. Lewis gave her IV fluids, even though she wasn’t dehydrated, because there was a slim chance that they would help raise her blood pressure and give her strength. We sat with her for hours, petting her, talking to her, keeping her warm and comfortable. All the while knowing that for every minute she was down, her chances of survival, already so low, were dwindling even further.

At 7am, we called Dr. Lewis back to SAFE. We fed Rowan small handfuls of lovely alfalfa hay as we waited. She ate each bite with pure joy then insisted on more. We surrounded her with love, with peace, and with sincere gratitude for having known her. We felt that the whole SAFE community was there with us, even though it was early morning and you didn’t yet know you had lost her. Rowan left this world calmly and quietly, with bits of alfalfa in her teeth and memories of what we hope was the best week of her life.

With the grief comes disappointment. We wanted to save Rowan so badly. To contemplate letting her go was unbearably difficult. It makes you want to scream, to fight back, to refuse to give in. How many of us had smiled to ourselves, picturing a fat and sassy Rowan, kicking up her heels, her black mane blowing in the wind? Now we will only see that in our imaginations. It’s not fair. It is bitterly disappointing that we couldn’t save Rowan.

With the grief comes consolation. We tell ourselves, at least she didn’t die alone in a field. At least we gave her one week of the life she should have had. At least she had these happy moments, and at least she will never be forgotten. We console ourselves as a means of protection, because there has to be a limit to how much the heart can take. We lose another horse and the world keeps turning. We have no choice but to keep going.

And with the grief comes anger.

But with anger comes action.

Rowan’s story does not end here. 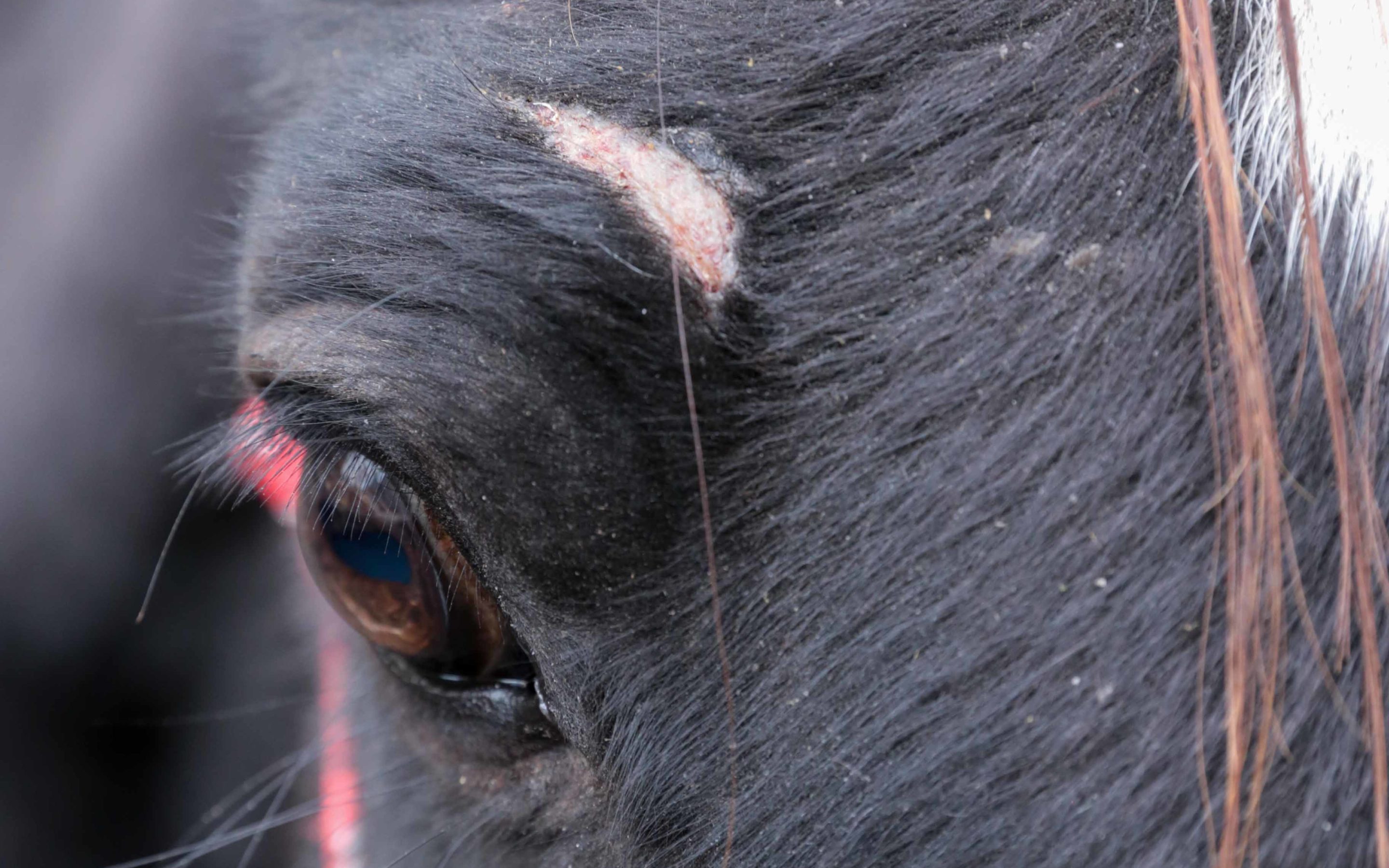 We are hoping to chronicle Rowan’s transformation from BCS score of 1 to a beautiful healthy mare! Here are the photos from her first week at SAFE. 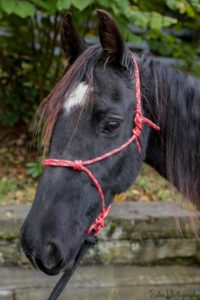 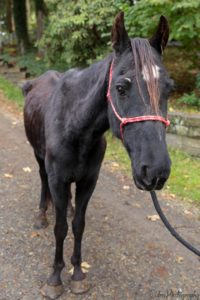 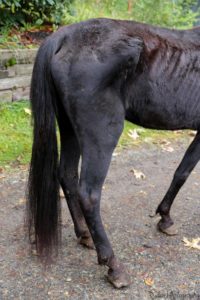 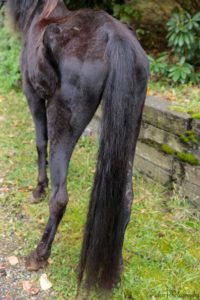 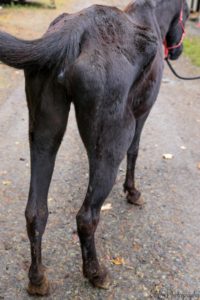 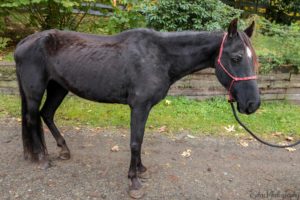 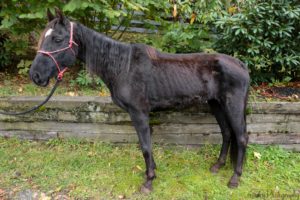 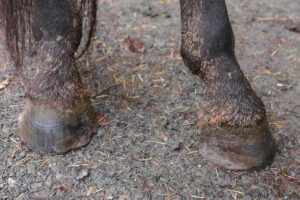 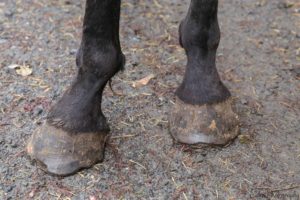 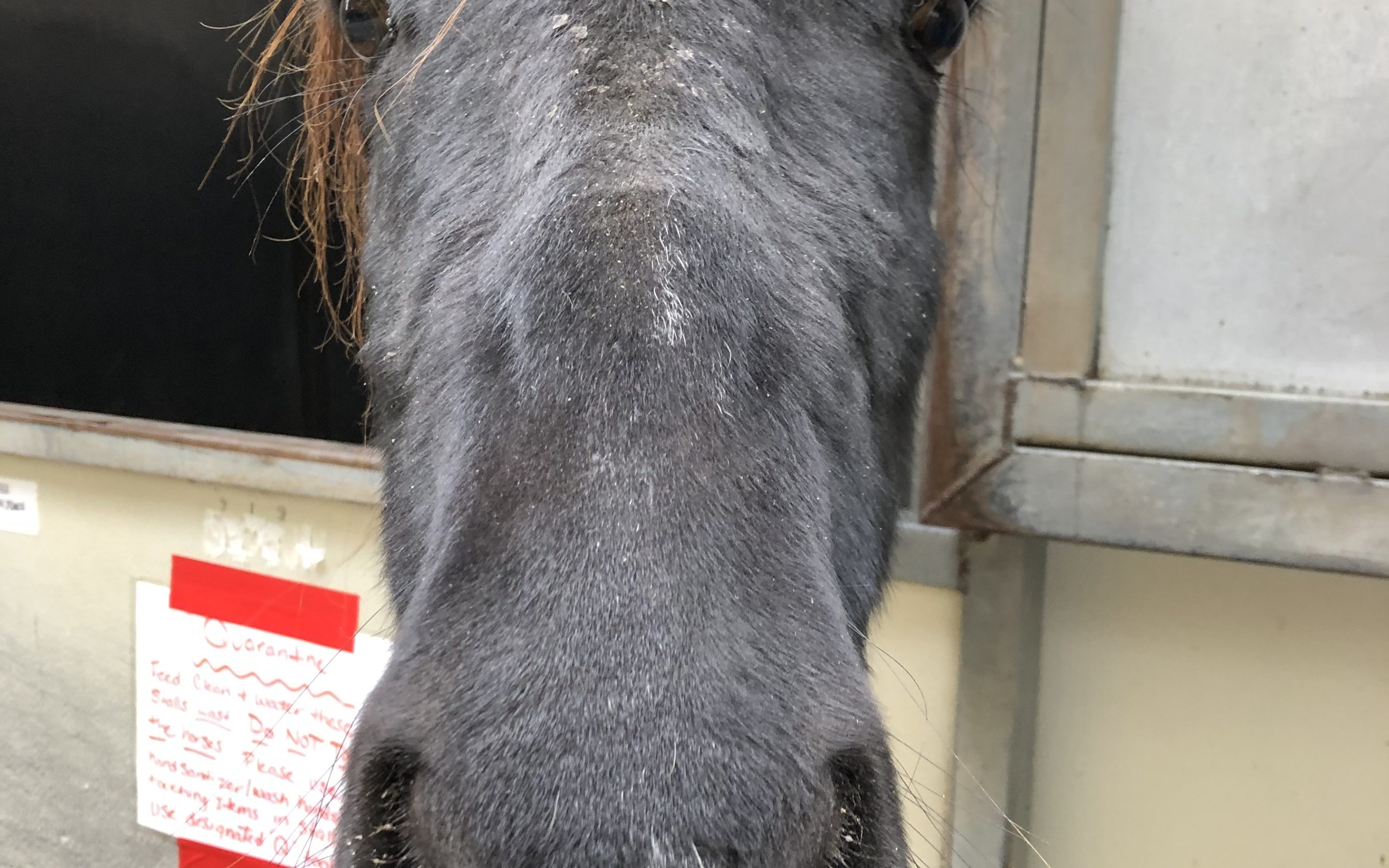 ROWAN UPDATE: Our little friend seems brighter and more comfortable in her ICU stall here at SAFE. She delighted her 6am feeder with a happy whinny this morning, which seems like a really positive sign. Her bloodwork came back yesterday with nothing alarming to indicate, which is a huge relief because we worry about organ failure in horses this emaciated. She’s being fed every four hours, which means that food even comes at 2am and 6am, which Rowan thinks is pretty great. She’s got a camera in her stall for round-the-clock monitoring, as well as in person checks every four hours.

From her deeply bedded and spotlessly clean stall (yay, SAFE volunteers!!!) Rowan is starting to show a real interest in the activity around her. Today she got a short walk outside with Melinda, and then was fitted with a blanket to help keep her warm at night. All in all, she’s doing much better than expected! Keep those positive thoughts and well wishes coming because they do seem to be working!! 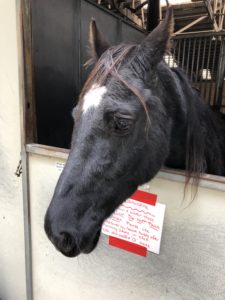 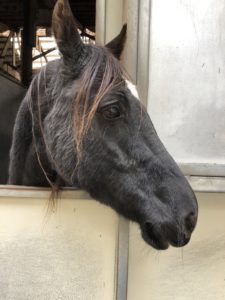 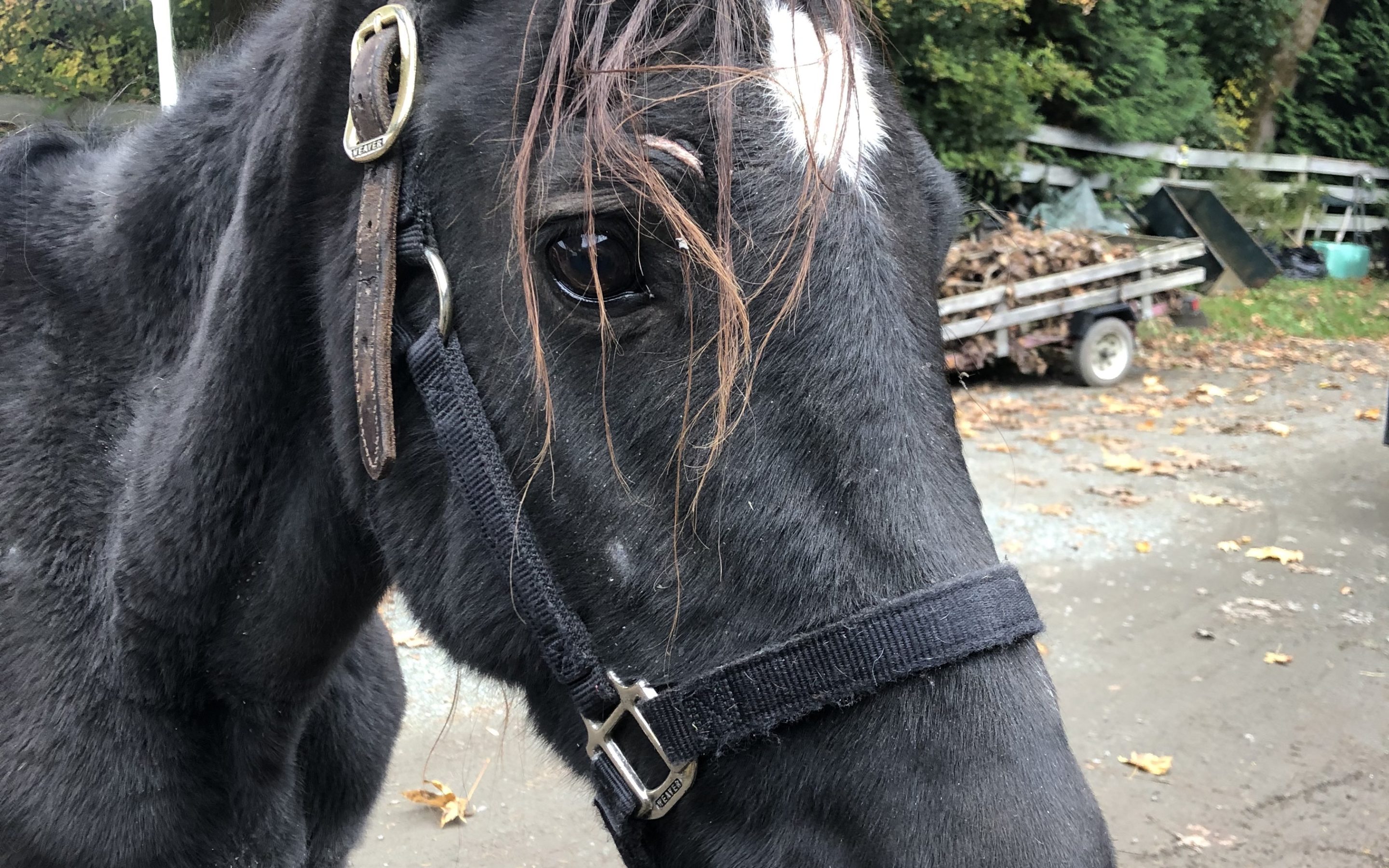 Rowan is a mare who is approximately 12 years old, all black except for a big star and a snip. She is extremely emaciated (BCS 1), so to prevent refeeding syndrome, she is being given a pound of alfalfa every four hours round the clock. This morning, she greeted her 2am feeder with nickers, and seemed rather surprised and pleased that she was being treated so well. The amount of hay Rowan is receiving will be slowly increased over the next 3 weeks as she moves closer to her target weight. She was seen by Dr Renner last night, who gave us precise feeding instructions and took a blood sample to be tested. We are optimistic that we will be able to manage her care through this crucial period, and that Rowan will start putting weight back on very soon. 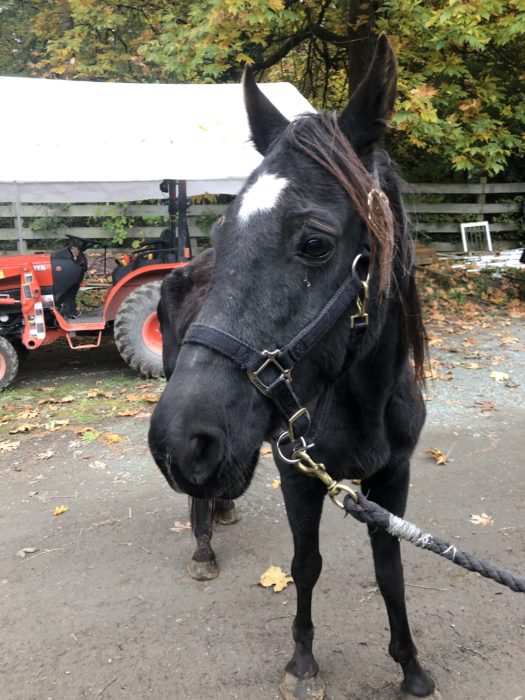 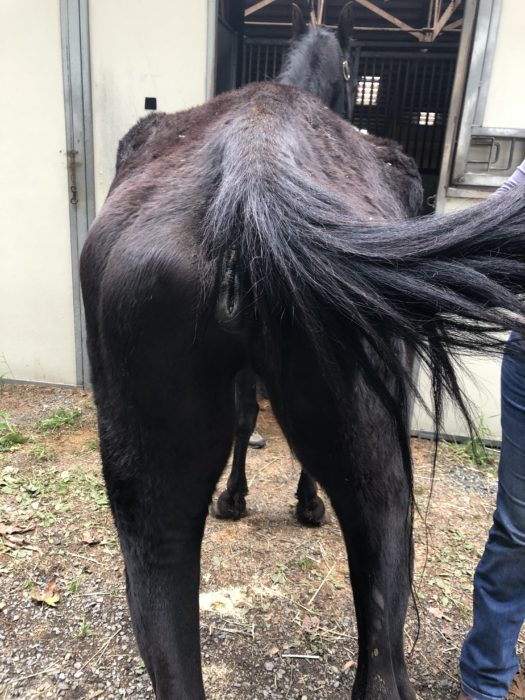 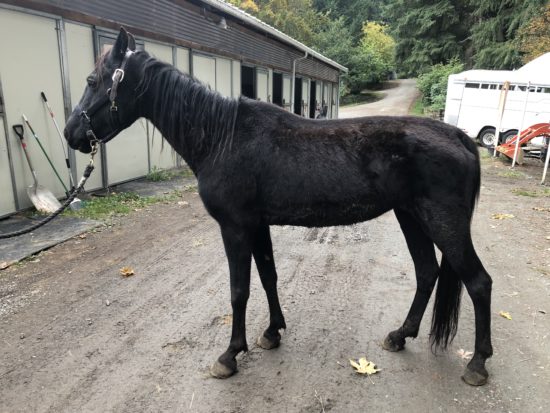 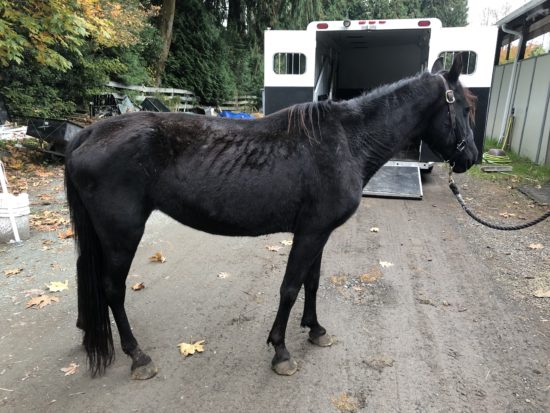 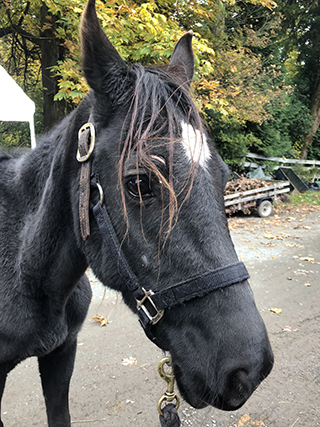