Thank you to Rocky’s wonderful foster mom Kellie for this update on our boy! 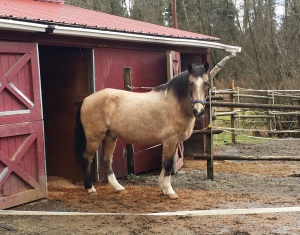 Rocky is gaining weight, as evidence by the picture (somewhat) and his medium blanket (which is now very tight).

He is eating about 3+ flakes of hay at day. (We just keeping putting more in front of him, so, free access to hay). Mainly Timothy with whatever Alfalfa/orchard grass mix he will eat. He seems to prefer Timothy. He ate his pellets well until the last couple of weeks. I think he is telling us that he doesn’t need them so much now that he is eating more hay. He is getting about 4–6 lbs of tim/alfalfa pellets with his vitamins, milk thistle, Smart Pak Ultra, hoof supplement, salt and some bute. He is finishing up pretty much all his pellets by the end of the day; so, he is getting most of his supplements. I am now doing bute only in the pm feeding (which he eats the best). About ¾ gram or so. He gets his Prascend in the am in 2 apple bits. I have been transitioning him over gradually to this, so, when we are on vacation he is easy for our help. I am going to try and take him off of the bute in the next couple of days… See if his eating changes…

He seems to eat the best when no one is around. However, he will now stay in his stall if you come in some of the times. He is very wary of everyone. Probably the most attached to me and then Peter. I am giving him tiny slivers of carrot to get him to come to me and maybe trust me eventually. He is not as hard to catch now.

Blanketing is a big issue, especially around his legs. I can do it by myself if I “throw” the lead rope through the grill (not tied) and he stays, but swings and tucks his butt in apprehension.

He is doing very well with his new shoes. I will have Jim take off the pads when he comes to check thrush and treat and then put pads back on. The thrush was much better when he put the shoes on.