Romeo is a 6 year old (7 in May) Hackney stallion, dark bay/white pinto, 14.2h, that was surrendered to SAFE after being abandoned on a property in Mill Creek two years ago.  The property owners have been feeding the horse and lost contact with the owner two years ago, after the owner asked if she could keep the horse in their pasture for a while.  After they realized that the horse had been abandoned, they tried to get help from Animal Control, and learned that the owner of the horse had abandoned several others on various properties around Snohomish County.   The property he came from was terrifyingly unsuitable for a horse, though dry pasture, it was full of old boats, cars, appliances, junk and various metal hazards.  Amazingly, he is in decent condition physically, in good weight and feet not in bad shape, except for a missing chunk of hoof that the farrier carved out due to thrush.

Romeo is a registered Hackney (1/2 Hackney Horse, 1/2 Hackney Pony), who will be turning 7 this May.  He is a stallion and was previously used for breeding, but will be gelded shortly.  He has an injury to his right hind fetlock, that so we were told, he was born with.  It is severe and appears to be broken, but he does get along well on it and it is probably fused and therefore hopefully fairly pain-free, although it is unlikely he will ever be ridable.  We will be having our vet assess it shortly.  Hopefully he will be deemed pasture sound.

Hackneys are reportedly a fairly rare breed, and Romeo is even more rare due to his pinto coloring.   He does have the typical, very high-stepping fancy movement (despite his crippled back leg) and he’s an incredibly handsome animal.  But I am most impressed with his temperament, as even though the sight of a trailer driving into his pasture caused him to run up the hill and hide behind the heaps of trash and an old boat, when I went up there with a halter to catch him, he walked cautiously up to me and let me catch him.  He is very sweet, not mouthy or rude, and loaded into the trailer with only a little hesitation.  Upon arrival at his foster home, he was obviously very excited to see and hear other horses, and was calling for them, but he remained manageable and respectful of my space.  I am very optimistic that someone will be interested in him as a family pet once he is gelded.  He’s a very sweet boy! 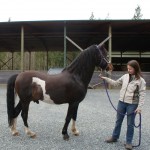 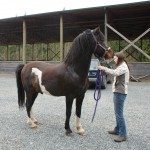 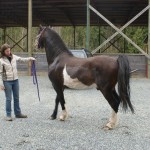 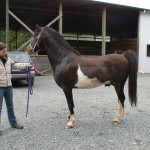 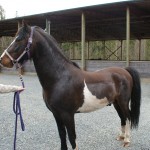 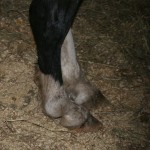 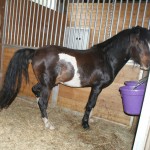 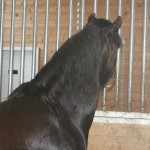 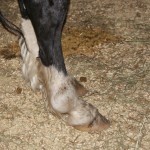 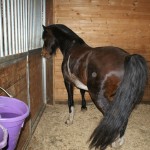