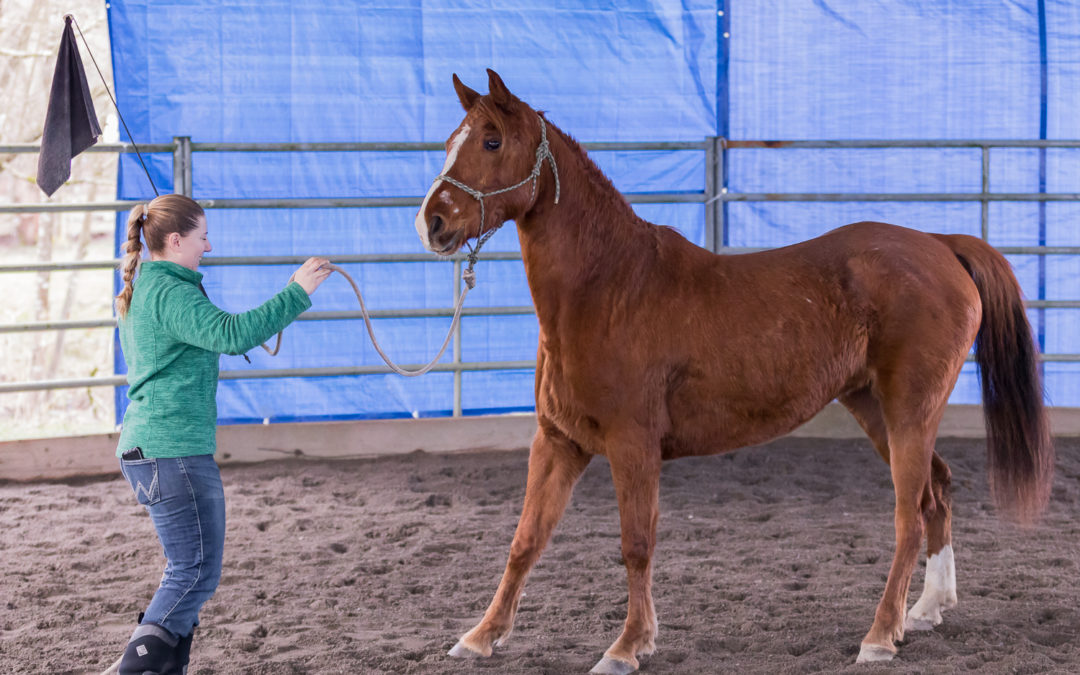 Volunteer rider Lisa G has been working with Roscoe and Teddi on the ground, preparing them for Joel Conner’s visit on March 15. Lisa is using the flag and the coiled rope to help them get more comfortable being touched and moved about. Here are her reports on their progress:

Feb 17:
Roscoe and Teddi both did great this morning! Got the coils all over Roscoe, he was a little nervous at first, but settled right down. threw an open loop over his back, and only had one butt-tuck-Boot-Scootin-Boogie moment when the end went under his belly and wrapped in between his back legs… But he settled down through that too, and the next few times it happened, it was totally fine. I’ll work more on those and getting it around his girth area on Monday. Teddi got settled to be able to do lots of C shapes with brushes of the flag and lots of hindquarter yield with the flag nonchalantly coming into the shoulder and back out. With the CRAZY wind, they both worked in the covered arena and did well in the new space. Good ponies!

Feb 28:
Another great day with these two! Got the rope all over Roscoe, backed him into the loop, was fine with it around his girth area and flanks. Even moved his front across with the loop around his girth! Only had one little moment of squirting forward, when I dropped the rope off of his rump for the first time, and it was around his hocks. Each time after that he was fine. Still a little uncertain about the coils on his bum, but settles into it just fine. Teddi did great with the flag, still started with it way far away, then coming into her shoulder, then c Shape/ squeeze exercise… But ended the day with several circles and hindquarter yields with the flag coming in nonchalantly to touch her shoulder and back. Lots and lots of licks and chews!

Mar 7:
Roscoe: saddled last night in the indoor, worked on the line, did fine. Turned him loose (saddled) in the round pen today, worked until he moved off calmly and kept him moving through his, “we’re done, mmmm-kay?!” turn-in moments until he was listening to my feel. Almost fell on his face a couple of times, picking up the trot.… but not his feet!! … and tripping himself LOL! He obviously needs lots of balance and hind end strengthening work. Other than that, he did great… He did knock me over when I was grooming him, brushing his front leg. Something spooked him, and he shouldered me over, then immediately jumped back away from me. Totally not his fault, not my fault, just a freak thing… But we do need to work on him keeping out of our space, on the line and when he is coming into the center at Liberty. He’s a creeper! 😝😂❤

Teddi is coming along great! Loads loads better with the flag, can’t wait to hear what you think when you work her tomorrow. Today got to a point where she was doing C shapes, accepting the flag flipping over her back at the withers, coming into the shoulders, brushing over her bum, and coming into the chest, all calmly– including changing eyes and moving her front across. We got going calmly both ways a couple of times and I stopped. I really really like this little mare! 🤓