Yesterday was an extremely busy day at SAFE!  First of all, we have the new horse Corona who came in late yesterday afternoon.  Dr. Hannah finally got a chance to look at him last night.  She has not yet spoke to the vet who treated him previously (hopefully will do that today) but her overall impression is that it is “not too bad”, despite how bad it looks.  She was not able to get his penis out completely and did not want to sedate him because of his condition and until she spoke to the other vet.  She was puzzled about the sutures, which seem to have been put in place to keep him from dropping his penis.  She went ahead and removed them and a bunch of pus came out.  However, from what she could feel there are some lacerations but nothing horrible.  She drew bloodwork on him and wanted to check that and speak to the other vet before starting him on antibiotics (she is also concerned about the diarrhea) but is pretty optimistic on his recovery.  She also took a fecal sample and he’ll get lice-dusted today.

Before Corona came, Dr. Hannah had a busy day at the SAFE farm doing spring shots and dental floats on Annie, Dexter, and Lexi.  Lexi was a good girl and we are hoping to wrap up her adoption soon and send her on her way to her new beginning!  Dexter was good right up until the sheath cleaning.…he was not happy about that at all.  Despite sedation it took two of us handling him (one with a stud chain) and Dr. Hannah carefully staying out of firing range while she cleaned him.  He did finally settle and grumpily accept it, but he was not at all happy about it.  And Annie…well Annie lived up to her reputation for being a drama queen!  She knew something was up right away and was on high alert as soon as we took her into the stall.  Dr. Hannah decided that we’d sedate her first before we did anything else, and the first thing Annie did when we she just started cleaning her neck with antiseptic for the sedation was to rear.  Even sedated, she was not having anything of having her temperature taken and kicked the wall so hard that Dr. Hannah also decided to forgo it, seeing as how she was obviously feeling just fine. 😉  She required two more hits of sedation to get the dental float done but we got it done, with Annie glaring hatefully at Dr. Hannah from the dental halter the entire time.  At this point, after 3 years dealing with Ms. Annie, we just have to laugh at her antics.  She’s such a good girl most of the time, but she knows what she doesn’t like and throws some pretty impressive temper tantrums.  Afterwards she was so relieved when Dr. Hannah left her stall, and she lowered her head and put her head in my chest, sighed deeply and closed her eyes and just let me rub her forehead while I soothed her emotions and her ego by telling her what a beautiful girl she is.  She is such a diva!

Lastly, a not-so-good update on Tia.  As I mentioned in my last update on Tia, she was very nervous and worked up yesterday when I went to visit.  In fact, while Dr. Hannah was at our farm working, she received several calls about Tia from her farm help at NWESC. They thought she was upset because the other horses were out so brought another horse in across from her that she could see. That seemed to settle her for a little while but then she got worked up again, for no apparent reason.  She was excited when I was there, pacing and calling, and they had taken her blanket off earlier because she had worked herself up to a sweat.  When Dr. Hannah called me last night to give me an update on Corona, she told me she was very concerned about Tia whose behavior continued to escalate throughout the evening even as other horses were brought into their stalls.  She finally gave her some Ace which did settle her down.  However, she is very concerned about the anxiety for no apparent reason and took bloodwork on her last night.  One possible cause for unexplained anxiety is liver failure, and another is a brain tumor (such as Cushings).  Neither are very good possibilities, so I am anxiously awaiting an update this morning as to whether or not Tia was calm this morning after the Ace wore off or if she was again agitated, and also waiting for the results of the bloodwork.  Hopefully I will have a more positive update later today.

Here are a few photos however of Annie, Dexter and Lexi getting their dentals!  I also had to include a photo of Dr. Hannah’s “dental assistant”, her 1‑year old daughter Heron, who was so cute in her SAFE purple colors! 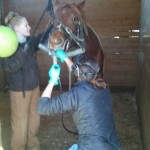 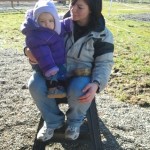 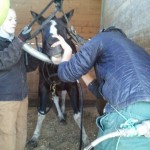 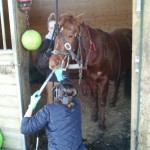