Another busy day at SAFE! This morning Allison, one of our volunteers and myself hauled Annie and Zanadu up to the Evergreen Fairgrounds in Monroe where they participated in an event for the Snohomish County 4H called Equine-O-Rama. Dr. Hannah Evergreen gave a talk about her non-profit, Northwest Equine Stewardship Center, and talked about the process of rehabbing a rescue horse. I spoke a bit about SAFE and Geri Vincent from Equine Aid was also present with one of her rescue horses, Scarlett, as well as her donkey and mascot Petey.  Annie was a superstar and absolutely loved the crowd of admirers that gathered around her after the talk.  Zanadu also got a lot of attention, although she was perplexed as to why we hauled down there just to stand around and thought we really should be doing something.  She also was VERY interested in Petey!

While we were busy at Equine-o-Rama, our volunteer Abby gave a farm tour and talk for a couple of students from Bear Creek School’s Equestrian club.  Thank you Abby for handling this for us since we couldn’t be in two places at one time!

Tia seems to have settled down and is no longer agitated as long as she is in her stall, but her left eye is still bothering her quite a bit and very swollen and oozing.  She may have banged it during her bout of anxiety, or its possible she is having a uveitis flare-up.  It is also possible that her anxiety is caused by the fact that she is losing sight in her left eye as well.  For now we have held off on giving her the steriods and are hoping that she remains calm.  The good news is she couldn’t be in better hands at NWESC.

Delilah and Baxter both went on trail rides this week at the Pilchuck Tree Farm!  Both did great, Delilah was relaxed and on a loose rein and Baxter was also extremely good.  Sara was able to ride him in a lesson on Thursday, he gave her one buck at the canter but she rode him through it.  Delilah did have one mishap with her rider this week.  She doesn’t like cantering to the left much and her steering is still kind of rough, and at one point she decided to flip her leads (a clean change!) and just go right and her rider continued going left without her.  Oops!  But her rider landed on her feet and Delilah just cantered on to the right seeming not even to notice she had lost her rider.  No big deal, just get back on and back to work!

Corona is doing very well.  Dr. Hannah has spoken to the vet who saw him earlier this week and she feels like the injury is relatively minor once we get the infection under control.  We have had several people contact us that know him from his show days and received the below pictures of him.  Doesn’t he look wonderful?  We have high hopes for his adoptability once he finishes his rehabilitation and is ready for adoption.

Lastly, we have heard that the PBS story on Bucky B Lucky will air on Friday, February 18th, at 7pm.  This will be on channel 9 and in HD on channel 109.  We are hoping to set up some viewing parties for those that want to get together with other horse folks and watch it with us, so more on that soon! 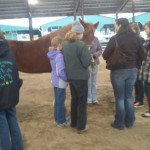 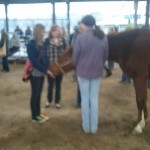 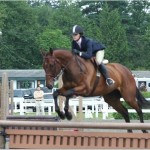 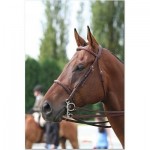 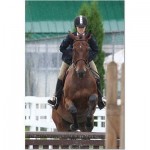 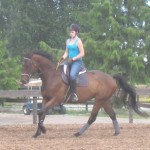 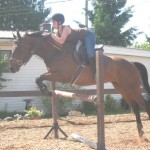 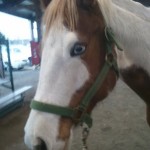 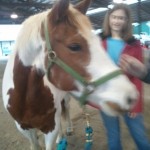