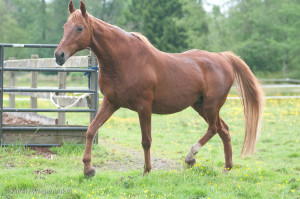 We said goodbye to a dear old friend this week. Surrounded by adoring friends, at the farm she’s called home for the past few years, Summer was humanely euthanized. Summer’s health had been slowly failing over the past six months or so, and she was starting to have a great deal of difficulty getting to her feet and walking steadily. Our vet gave her a thorough examination and determined that the neurological symptoms of unsteadiness in her hind end were likely being worsened by severe arthritis in her neck. Once this became clear, those closest to her, including her wonderful foster family, agreed that it was better to let her go than to risk having her fall or suffer in any way. As always, it was a difficult decision but when the time came, Summer made it clear to all of us that she was ready to go. Her passing was peaceful and dignified.

As sad as it is to say goodbye, it’s given us the chance to celebrate Summer’s life and recognize what an amazing mare she was. Summer came to us from a horrific situation of neglect and starvation; at age 19 she was the oldest of the horses to come out of that situation alive. She came to us rail thin, riddled with parasites, and with about half her coat missing due to lice and rain rot. Her lice infestation drove her nuts, and she absolutely loved to be scratched and rubbed to relieve the itching. Grooming put Summer right into a trance, so much so that you had to be careful she didn’t fall down out of sheer ecstasy and relief.

With proper care, Summer blossomed into a chestnut beauty with a shining coat and long, elegant neck. She would struggle with keeping weight on for the rest of her life, and her severe sway back sometimes looked alarming, but she was healthy and happy with a true appreciation for life. Once she was fully recovered from starvation, we found out she was well broke to ride. Not only did she compete and win ribbons at the SAFE Horse Show, she could also tote little kids around for fun when we asked her to. She had many significant equine friends both at SAFE and at her foster homes over the years, forming some very strong attachments to both the mares and geldings in her life.

As a companion horse, Summer spent most of her time in foster care, and she made lasting impressions everywhere she went. Her foster mom Brenda K sent us donations to buy treats for Summer, years after she’d moved on from her care. Summer became the companion to an older gelding named Mac in her second foster home, and she and Mac were inseparable. Mac always watched out for his friend Summer, and she seemed to feel very safe when they were together. The night that Mac passed away, Summer stayed by his side and stood watch over him all night to make certain he was not disturbed.

SAFE horse Buckwheat became Summer’s companion at her foster home after Mac passed away, and the two of them remained together for several years after. Bucky was a little guy and he seemed a little worried that Summer might take a bite out of him when she tried to engage him in grooming or rub up against him. Nevertheless the two were great friends, with Summer taking the dominant role over her older male companion, as a great lady often does. 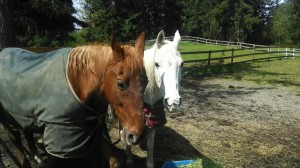 Summer spent her final years at Jackson Valley Ranch where she was adored by legions of little kids learning beginning horsemanship and riding. There she had another great friend, a rescued gelding named Lucky that the folks at JVR called “her husband.” Lucky was given the chance to say goodbye to Summer after she passed, and he nickered sweetly to her, which left everyone in tears. Summer’s ashes will be spread at Jackson Valley Ranch so that she will always be part of their lives.

There are so many people we want to thank for making the last six years of her life so wonderful. The volunteers of SAFE who nursed her back to health and gave her a second chance at life. Brenda K (and Miss Figgy!), who cared for her at her first foster home and never forgot her. To the amazing Carol and Steve A, who fostered Summer and Bucky for two years at their expense, and who remained vital parts of both their lives to the very end. Carol and Steve took care of the cost of having Summer cremated after she passed, in order to give her the dignity and respect they felt she deserved. Her current foster family at Jackson Valley Ranch opted to contribute to Summer’s cremation in order to have her ashes returned to their farm. The care that Lisa and her family provided for Summer over the past two years was incredible, and I think she felt she had found her forever home with people who truly loved her.

Summer touched so many hearts during her time as a SAFE horse, and she was probably the toughest, strongest survivor we have ever had the pleasure to know. We will never forget you, Summer. Rest in peace!

Thank you to Carol and Steve A who donated $500 in memory of Summer and Bucky during GiveBIG yesterday.