Sinatra is now available for adoption!
I have some new information on Sinatra from someone who used to work out at Jean’s farm in Monroe. Sinatra is actually older than Phoenix. Sinatra turned a year in around the April/May timeframe, and Phoenix was more like a July/August baby. However, Sinatra’s dam, Sea of Wisdom, was not very tall, not more than 14h, whereas Phoenix’s dam, Olympic Spirit (aka Gypsy, also Willow and Dutchess’s dam), was around 15.2–15.3h. We believe Olympic Spirit to be one of the dead mares in Carnation. Sea of Wisdom however, was never found. Based on what I have been told and the pictures I have seen, she was a sickly skinny mare even in summer and she had chronic diarrhea. Jean apparently weaned Sinatra at a month old and bottle fed him as his dam was doing so poorly and not producing enough milk (whether THIS happened, we will never know, but suffice it to say it wasn’t enough for him). This would explain why Sinatra was the only handled baby of the bunch and wearing a halter.

I have seen a couple of baby photos of Sinatra and if I get permission to post them, I will. He was a pretty pathetic looking baby who did not look healthy right from the start. A far cry from how he looks now!

I have been given permission to post some very special photos of the horses, taken by someone who worked at Jean’s up until December of last year. This person wishes to remain anonymous but you can tell from these photos that they cared for the horses very much, and were horrified at what happened at the farm. Like most of the people who worked for Jean, when they started out there they did not know anything about horses and Jean was their mentor, and it took some time before they became aware or noticed the neglect, because Jean always had excuses. Sinatra’s dam, Sea of Wisdom (Wizzy), was apparantly always thin and had chronic diarrhea, which of course we all know was caused by the massive parasites that were rampant on the property.

Sinatra, on the day he was born: 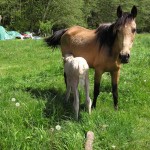 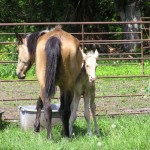 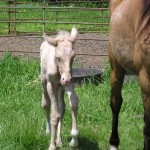 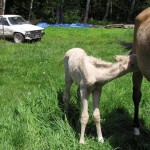 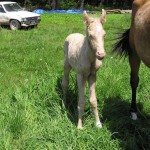 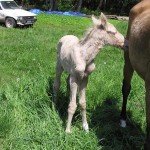 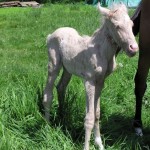 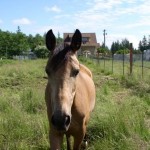 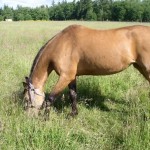 Included also are a couple of recent photos of Sea of Wisdom, who was thankfully sold by Jean Elledge before the seizure and she survived that fateful winter: