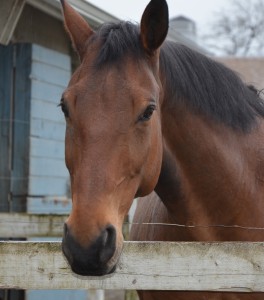 Strider has apparently had issues with pressure sores on his fetlocks long before coming to SAFE, and no matter how deeply bedded his stall, the small sores persisted. Recently he’s developed some proud flesh at the site of one of the sores on his hind leg, and so Brittney has been making a valiant effort to treat the problem. This involves a daily routine of unwrapping his bandages from the day before and removing the scabby bits (something Strider apparently enjoys doing himself…ew!) then taking him outside for a session of lunging and cold hosing to reduce swelling, and then a good scrub to all four fetlocks with Betadine. Then his legs have to be given time to dry completely before Brittney can treat the pressure sores with neosporin and the proudflesh with ProudsOff and rebandage all four legs with standing wraps. Strider is a great patient, but you have to admit, that’s a lot of work!

But despite all this effort, the proudflesh hasn’t been healing as well as Brittney would like it to. And this past weekend, Strider’s leg ballooned to twice its normal size, which meant an emergency vet call to Dr Hannah. She diagnosed him with cellulitis, which is a bacterial infection of the soft connective tissues under the skin. (You can read more about cellulitis here.) Although the leg was quite warm, Strider was not running a fever, but he was immediately put on bute and a course of antibiotics. By the following day, the swelling had gone down quite a bit, so we are guardedly relieved that the worst has passed. But we are quite concerned about the big guy, and we continue to ponder what the future looks like for him.

His back continues to improve, but we still don’t know if he’s really ever going to be able to be ridden again. So what he needs at least for the present is a home that can accomodate a horse of his size — in other words, an experienced horseperson who won’t be intimidated by him, who can safely work with him on the ground, and who can deal with his ongoing medical issues if and when they arise. He’s a very friendly horse who gets along great with other geldings, but a full pasture turnout with other horses might cause recurring injury to the skin on his back so he’d have to be monitored closely and treated as needed. The truth is we don’t know exactly what the perfect home for Strider would look like, but we need to make a concerted effort to figure that out. It’s our wish that the perfect “retirement” type home will come along for Strider so he can move on from the rescue environment and into a setting where he can be more comfortable. Maybe if we all wish together, someone perfect will come along for Strider. He’s a great horse with a heroic heart who has been through so much, and he deserves a place of his own.

So please think good thoughts for our boy to get through this bout of cellulitis and to find his future beyond SAFE.