The Further Adventures of Owen the Gelding

Owen joined the ranks of happy geldings everywhere this week, when he underwent a successful procedure to rid him of his family jewels. Getting there was a bit of an adventure, but now that he’s a gelding, Owen starts the next phase in what is sure to be a wonderful life.

Owen’s initial gelding appointment was scheduled for last week, one month following the tetanus shot he got at his last vet appointment. The shiny leather halter that had been put on Owen while he was sedated stayed on for nearly a week before the Houdini Horse managed to unclip it and take it off without the benefit of opposable thumbs, or in fact any fingers at all. Attempts to replace that halter were met with evasion, but the day before Owen’s gelding appointment, I was finally able to successfully get a neck rope on him that would allow me to at least start to introduce concepts like giving to pressure and standing still when asked. Things were finally starting to look up! 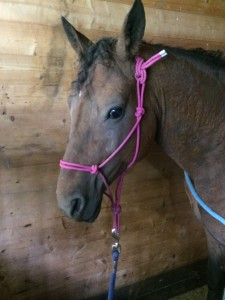 On the morning of Owen’s first appointment, the vet’s arrival was delayed by two emergency calls which meant we had a couple hours to wait for him to arrive. We used that time to work some more on haltering, and lo and behold, I was able to get a rope halter onto Owen! In fact, once I was able to get the noseband in place, he actually stood quietly for me to tie it! Hallelujah! After clipping on the lead rope, Owen made it pretty clear to me that he had no idea what to do next, but we practiced taking a few steps to the side and he seemed fairly willing to yield to pressure.

When the vet arrived, we were waiting for him in Owen’s stall, ready to face the music. But while Owen had just made some major league progress in his education, he was in no way ready to stand still for an IV injection from a rather large and unfamiliar man like my vet. He accepted the needle going in with a minimal amount of shock and a quick jump to the side, but when the vet moved towards him to complete the injection, he reacted with fear and scrambled to get away. My vet immediately declared “game over” and said that with the day’s delays he did not have time to go through the process of darting and IM sedation, like he did for Owen’s dental float. He left me with a tube of oral sedatives and instructions to reschedule the gelding appointment and plan to administer the oral sedative 30 minutes before his arrival for the new appointment. So Owen would remain a stallion for another week.

We spent that week working on a new skill: learning to walk on a lead rope like a big horse. For safety, we worked outside in the paddock, using a lunge line in place of a lead rope, so that if Owen decided to panic or throw a fit, he could do so from a safe distance from me. With the rope halter on, it was just a matter of him allowing me to catch him in his stall to attach the lead, and then moving outside for his lesson. This would continue to be the pattern for several days, since Owen continued to be reluctant to allow himself to be caught, even with a halter on.

On Day One, Owen proved to be quite easy to move to the side, both towards me and away from me, but when asked to step straight forward, he’s completely baffled. So I stand in front of him, put on-and-off pressure on the lead (putting pressure on his poll) and ask him to “Walk.” It takes about nine “pulses” with him gently resisting the pressure until he finally relents and takes a single step forward. I immediate release the pressure and celebrate this achievement, telling him what a good, good boy he is! The next time I ask, he takes a step forward immediately! What a smart boy! We go back to yielding his hindquarters on a circle, try a little backing, and then return to the forward step. Again, one ask, and he immediately takes a step forward. We end the lesson right then and there and consider it a complete and total success.

On Day Two, we get ambitious and attempt a series of forward steps with me in front of him, facing him and asking him to step towards me. But this is just too easy! We repeatedly cross the paddock going forward, and then cross the paddock going backwards. Owen is calm, agreeable, and willing to please. Not only that but he is perfectly willing to let me rub his face, touch his ears, and pet his shoulder and neck on both the “safe” left side of his body and the previously forbidden right side of his body! He also accepts being groomed, and I dare say he might even like it. After months of glacially slow progress, Owen is suddenly acting like a completely new horse! And he’s still a stallion.

Day Three we begin to work on leading from a more traditional leading position — that is to say with me walking in the same direction as opposed to walking backwards in front of him. He takes to this immediately, and we practice walking patterns around cones, walking through the pasture, and even enjoying some hand grazing time. Again, Owen is perfect for me. Back in the paddock, we try an experiment: I unclip his lead rope and walk away from him, then I walk back to him and give him a rub on his neck. He doesn’t have to allow me to do this, but he does. After several more tries at this, I come back and ask him to move his feet, just in case he doesn’t realize that he is loose again. He still allows me to touch him, rub his neck and face, even though he is loose in the paddock. We are making such great progress. Afterwards, we stand together and reflect on the day’s lesson, and as I absently stroke his muzzle, he lowers his head and leans into my chest a little bit.

On the day of Owen’s gelding, we were ready for anything. To prepare him for the oral sedative, I fed him some applesauce from a syringe, and he thought that was just dandy! When offered the syringe, he’d chomp right down on it and refuse to let go, obviously loving the applesauce that was being squirted into his mouth. This may have been a little bit of a problem, to be honest because when it came time to give him the oral sedation, he gobbled it right down with gusto, when actually it’s supposed to remain in the mouth under the tongue for several minutes in order to be absorbed into the bloodstream. But nevertheless, it ended up inside him and not down the front of my shirt, so I considered it a win.

But when my  vet arrived, I came to a sudden realization that I might have overlooked one important fact. Owen trusted me, so for me, he had been acting as gentle as a lamb. But once again, when my vet approached him with a syringe in hand, Owen’s immediate response was to attempt to flee. This strange man was frightening, and Owen was not going to stand still and allow himself to be poked. 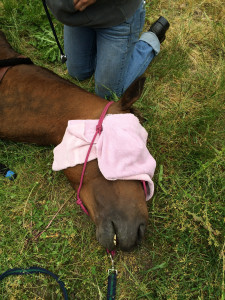 So it was back to the darts. In the end, it took four of them before Owen started to show signs that he was slowing down. He was fighting the sedation, and adrenaline was counteracting its effect. Finally, with the help of a twitch and a farrier to hold his line, Owen received enough IV sedation to end the battle. He was guided to the ground, and the gelding procedure went forward without further ado. Both testicles (“as big as mangos!” my vet remarked) were cleanly removed and Owen was given a tetanus booster and an injection of antibiotics to carry him through the next four days.

We left him in the field to wake up on his own. When he got back to his feet, he was so groggy that he seemed to have forgotten how to walk. But he steadfastly made his way back into his paddock and into his stall.

Now that we have achieved a successful gelding, Owen is forced to endure two daily 15 minute sessions of exercise to help reduce swelling and promote proper healing. Since Owen doesn’t know how to lunge, and I’m too old to chase him around the pasture, we’re doing his exercise sessions in his paddock, where he has learned to free lunge at the trot, including changes of direction, with just hand gestures, verbals cues, and a little prompting from the lunge whip. He’s remarkable. We attempted to video this morning’s exercise session, and while some of the action takes place off camera, this will still give you a sense for how nicely he is doing with this.  My hope is that we can graduate to doing this on a lunge line this weekend so he can move in a bigger circle out in the pasture.