SAFE welcomed three new horses to the herd today. These horses were badly neglected, starved, and in desperate need of veterinary care when they were seized from their owner by Pierce County Animal Control. A fourth horse that was also seized with this group was humanely euthanized due to her poor condition.

The horses were transported to SAFE from Pierce County, where they had been held following their seizure as required by law. Their owner did not petition the court for their return, so ownership has been signed over to SAFE by the county. 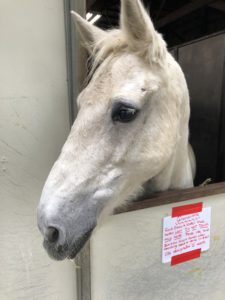 BUTTERSCOTCH is a 28 year old mare who had previously been diagnosed with Cushing’s Disease while in her owner’s care, but was not receiving treatment. She has a long, shaggy coat that has not shed out, which is a classic indicator of Cushing’s. When her levels were tested after her seizure, she had an ACTH level of 468, which is extremely high (normal at this time of year is less than 100). She is underweight (BCS 2–3), with muscle loss, long, chipped hooves, anemia, parasites, and several small melanoma on her lips, tail, and anus. A dental exam revealed a loose tooth, and the sharp points and waves that develop when a horse’s teeth aren’t floated on a regular basis. With her teeth fixed and a steady supply of good feed, Butterscotch is already brighter; in fact the vet who did her 30 day recheck described her as “sassy”! 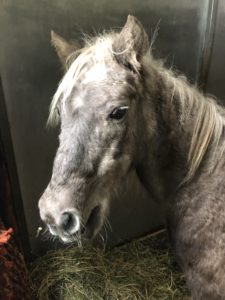 MARA is a 30+ year old Shetland pony, who also has extremely high ACTH levels and suffering from Cushing’s Disease. She is extremely thin (BCS 1.5) with long hooves, parasites, muscle loss and ataxia. She also has a scarred cornea in her left eye and had copious green discharge from both eyes, indicating bacterial conjunctivitis. An oral exam revealed four missing teeth, two loose teeth, and one broken tooth, and most of her remaining teeth had very sharp points and no remaining grinding surface. So not only was Mara unable to chew hay, her neglected teeth were creating large and painful ulcers on the inside of her mouth. She’s been put on a mash diet to ensure that she’s now getting the calories and nutrients that she needs. She’s started gaining weight, and now appears healthier and more comfortable. 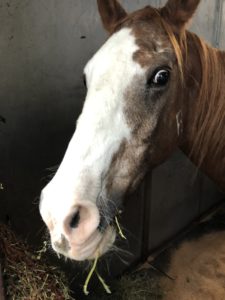 FARLEY is a 25 year old red roan breeding stock paint gelding with a BCS of 2 . He came in very thin, with muscle wasting, stiffness, swollen limbs, problems with his eyes, including puffiness and clear discharge, and a possible squamous cell carcinoma on his muzzle. His teeth were also neglected, with sharp points and minimal grinding surfaces remaining. Because of this, the vet recommended that his diet should consist mainly of soaked pelleted mashes, along with small servings of alfalfa hay. After 30 days of care, Farley is still moving slowly, but he’s gaining weight and looking healthier.

Prior to their arrival in Pierce County, these horses were part of a large herd living together in a barren, overgrazed pasture in King County. These elderly horses were housed with multiple other horses in a heavily over-grazed paddock, and they were sporadically fed poor quality hay in insufficient amounts. None of the seized horses appear to have been capable of fending off younger and equally hungry horses to get to their food. And the condition of their teeth caused them to drop partly chewed hay as they tried to eat, something that an observant owner with fewer horses might have noticed.

Pierce County will be pursuing first degree felony animal cruelty charges against the horses’ former owner for their failure to properly care for the four seized horses. They are working closely with RASKC (King Co Animal Control) who had been monitoring the herd for the past year, and who were preparing to seize the four themselves when their owner moved them to Pierce County.

But while the courts do their duty, our job is clear: to continue rehabilitating these horses and return them to good health, good weight, and hopefully, some happiness. We’ll keep you posted as to their progress, so keep your good thoughts and well wishes coming their way!