Volunteer Sara E rode Kat on a trail ride this weekend along with Terry and Skittles. Sara was able to compare this ride with one she and Kat went on a year ago. Not only does Kat know Sara better now and trusts her, she is also clearly feeling much better in her own body and movement. She was great during the entire ride, even when riding along the road with cars passing and past the alpacas and barking dogs.

Here’s Sara’s report on the ride:

“This past weekend, I took Kat out on the trails for the first time this year. This was my second time doing a trail ride with her, the first being last year out at the watershed. Last year’s ride, while enjoyable, was also not an easy stroll in the park either. Kat was manageable but she was uptight during the ride and never really relaxed or enjoyed it. The ride felt like a military march, where she just wanted to get her job done and get home. Yesterday’s ride was like night and day compared to the ride last year. She was relaxed, easy going and so much fun.

We started out the ride in the middle, with Terry on Skittles leading. Kat matched their pace with a nice relaxed low head. The trail was challenging, with lot of big hills to go up and down and not the best footing. Kat took all of it without ever needing encouragement to keep going. At one point we ended up in the front and it was great, she didn’t care that the other horses were lagging behind. We had a nice fast walk, but she was on a loose rein with a low head and we were in our own little world. I think I’ll be smiling for days whenever I think about that ride, she was so good and it was nice to be able to relax and enjoy the woods, the weather and the other riders with out having to worry about the horse your riding.” 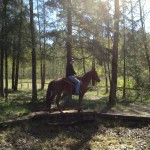 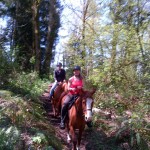 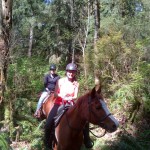