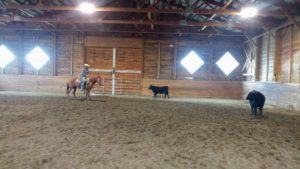 While in Ellensburg this past week, I visited with Jessel who is in training with Joel Conner. She has really grown up in the last few months and we are excited to see how she develops over the summer. Jessel has come a long way and Joel’s patient work with her is really paying off.

When I went out to the pasture to catch her, she came right up to the gate. She was very sweet and happy to have me bringing her in. This is a really good sign that she is enjoying the work . She stood quietly for the most part while tied to be groomed and wait her turn to work. Joel said that it took quite a few training days to get her to stand patiently. Youth and personality are wonderful things but they also make this authentic mare best suited for an experienced hand like Joel. That’s why we are so grateful for his time with her, a lot of which has been donated by him.

Joel saddled her without any issues and did a little groundwork before getting on. Jessel was very good for the riding work and easily went forward through all the gaits. Then the fun part: Joel took her out to the side of the arena and herded the cows into the arena! Jessel had seen the cows before but this time he worked on not only separating one off but also throwing the rope off of her to catch one.

Jessel is a NATURAL! This was my first time seeing a horse work cows but even from my inexperienced eye, I could tell that she liked it. A LOT! She easily “hooked on” to the cow and was drawn into moving their feet. Joel had to correct her a few times when she would get too attached to the cow and not listen to him but she easily came back to him and was very well behaved. Throwing the rope off of her to catch a cow may sound like no big deal but you have to remember not only does Jessel need to be responsive to Joel but she has to not get too excited by the cows, who were kicking up their own heels and enjoying the romp in the arena. More than that he had to go into one rein in order to throw the rope. I am very impressed with Jessel’s abilities and level head for such a young mare. She is a very exciting horse and getting an absolute amazing foundation with Joel.