We named her Grace

Many of our supporters have asked for more detail about what happened to Ruby’s foal. If you missed the beginning of the story, you can read it here.

Another busy Saturday night at NWESC had Dr. Hannah Mueller caring for her patients. She passed Ruby’s stall to see the mare standing quietly. When she passed by again after midnight, Ruby was laying down and the foal’s head had emerged. It was quite a surprise! 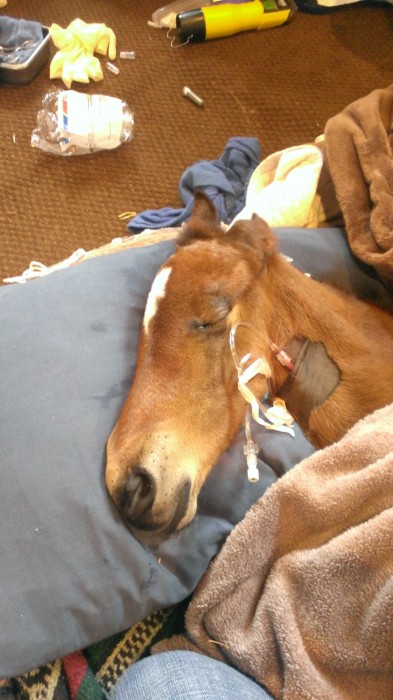 Ruby was too weak to effectively push the foal out, so Dr. Hannah had to help deliver her. When the foal arrived, she was barely breathing. Supplemental oxygen was given and the foal’s breathing stabilized. The foal’s initial attempts to stand were vigorous, but unsuccessful. Unfortunately, even if she had been successful there was no colostrum in Ruby’s udder. But still, she tried. Eventually, she tired and needed to rest.

Temperature regulation was a challenge for the baby. She was shivering and her lower legs were ice cold. Two heat lamps were added, along with multiple layers of blankets and sleeping bags. Dr. Mueller even crawled under the covers with her to share her own body heat. Snuggled up together, they passed a couple of hours until morning, when Pilchuck Equine Veterinary opened and some plasma could be obtained. Cedarbrook Veterinary Staff were called in on their day off, and gladly joined in the efforts to save the filly.

She was still making occasional attempts to stand, and had passed both urine and manure. It seemed that we had a viable foal. After it became clear that Ruby was showing no interest in the foal and keeping them together was not going to result in stimulating milk production, the decision was made to move the foal to a heated treatment room to help with her temperature regulation. She was still shivering uncontrollably. After an hour or so, the warm room seemed to help. All of her vital signs remained steady and normal. An IV catheter was placed in her neck for the administration of the plasma (when a foal is not able to receive colostrum from its mother, plasma is the lifesaving alternative.)

Since Ruby had no milk, small amounts of milk replacer were tube fed to the baby. Throughout the day, phone calls were made to Dr. Bryant at Pilchuck Equine, and we are thankful for his willingness to provide consultation with Dr. Hannah. He made sure we knew what to expect, what to watch for, and what to do next. During the plasma infusion, we worked to keep the foal relatively still so the IV catheter would stay in place. She could really flail those front legs and nearly took three people out with one vigorous swipe!

We started searching for a potential Nurse Mare, and were touched by the response from the equine community. Several options were available if the foal thrived. The plasma infusion was completed without incident, and we helped the foal to her feet. She would stand for small amounts of time, but only with a great deal of support from the people holding her up. As the hours ticked by, it seemed that she was not gaining strength or the ability to stand on her own. The milk replacer was not moving through her digestive system, and would occasionally dribble back out through her nostrils.

On our last attempt to move her to a sternal (chest) position, it became clear that she was no longer participating. She wasn’t holding the weight of her head, she wasn’t protesting with her long legs. She was done fighting. And we started thinking about letting her go. It was hard to talk about all the possible reasons why she wasn’t making progress. She may have a malformation of her heart or other organ, or digestive system. She may have been hypoxic during the delivery. She may simply have been born too early. Whatever the reason, we knew that she had fought hard, and we had fought hard, and it was time to let her go. There were many tears.

We can find some peace in knowing that she did not die alone in the dark and cold, with no one to care for her gently and whisper in her ear that she was beautiful and loved. After the foal passed, it seemed important to give her a name to acknowledge and celebrate her brief life. Something feminine; a name that represented her innocence and conveyed hope. She was, and always will be, a SAFE horse. We named her “Grace”.

Sincere thanks to our generous supporters who have already contributed to Grace’s medical expenses. Additional donations are needed to cover expenses for Grace and her mom Ruby, who continues to receive inpatient care. Please help if you can. An update on Ruby’s condition will be posted in the near future.

Please click here to make a tax deductible donation to help us with Ruby’s ongoing medical expenses. And thank you for being part of SAFE!