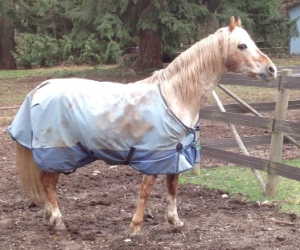 In order to make room at SAFE Harbor Stables for the return of Bucky B Lucky, we decided to give Chip a bit of a vacation and send him to the farm of SAFE’s Executive Director Bonnie Hammond, home of the infamous Honeycutt and Bonnie’s two OTTB gelding’s Jay and Chance. We felt it would do Chip some good to spend some time with some other geldings and have an opportunity to work on his social skills.

Bonnie reports that Chip has been an absolute angel since his arrival at her farm. He’s very sweet, well-mannered, and easy to handle. In fact, she’s found that when he’s worried about something, he’ll actually run to her for help and protection! He’s very curious about his environment, and he really likes to explore his surroundings and smell things. He’s had some time in the pasture to trot around and even stretch his legs by sprinting at top speed. The first night he was there, he was a little frightened by the sound of the coyotes that live in the nearby gully, but he seems to have gotten used to the night noises.

Chip’s interactions with the other geldings have been very encouraging. He’s interested in his new friends, and apart from making some strange grunting noise when sniffing noses with them, he’s done no squealing or striking at all. In fact, Bonnie has had to limit their time together not because of Chip but because her horses have all been a little agressive towards him. When turned out with Honeycutt, Chip spends a lot of time smelling Honeycutt (and licking his hocks??) and Honeycutt will tolerate this sort of attention for only so long. When turned out with her older gelding Jay, Jay will pin his ears and lunge at Chip whenever Chip wanders too close. And when turned out with 7 year old Chance, the two horses immediately set off galloping together…but Chip couldn’t handle the footing and fell down twice! So Bonnie is keeping him in his own paddock unless she’s outside to keep an eye on things. Overall, his attitude toward the other geldings is very good, but he’s so much smaller than they are that she worries about him. (He’s really such a sweetie that you forget he was a big bad stallion until just a short while ago!) As they get better acquainted over the fences, they’ll get more and more time to interact as a herd and teach Chip all about being a gelding, which will be wonderful for him.

Bonnie’s only complaint with Chip is that he uses his stall for a toilet, despite having full time access to a paddock, and he tends to make a huge mess that has to be cleaned up before each feeding time. But we can’t really fault him for that, since he was trapped in a stall for who knows how long before he was rescued. Bonnie is hopeful that he’ll soon discover the joys of peeing outdoors, and she is grateful to him for being gentle and well-behaved while his stall is being cleaned. Also she is the first to admit that she is very spoiled by horses like Honeycutt, who only relieve themselves in one far corner of the paddock.

Chip has also been suffering from some type of allergic reaction that started before he left SAFE Harbor, causing strange hives to form on his face and body. He’s been treated with Benadryl which has helped, and we’ve got our fingers crossed that things are now under control.

All in all, Chip is proving to be a delightful little horse who’s a lot of fun to be around, and we hope the future has great things in store for him!