What’s so remarkable about this picture? 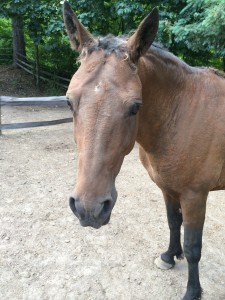 So what’s so remarkable about this photo of Owen? It actually represents some pretty amazing progress that our newest gelding has made over the past several weeks. Owen is now allowing himself to be caught easily in his paddock when it’s time for a ground work lesson…so well, in fact, that he no longer has to wear his halter all the time. He’ll now allow me to approach him, pet him, even give him a hug…while completely free in his paddock. So walking up to him and putting his rope halter on for a lesson is no big deal at all.

Now that Owen’s post-surgical forced exercise is over, we’ve gone back to our ground work training. The first big lesson that needed to be learned was not to point one’s bum at one’s caretaker…something that Owen habitually did from the day he arrived here. While this behavior initially felt like a threat, I came to realize that it was more of a position of comfort for him, allowing him to keep his distance and prevent me from approaching him…his way of keeping me at arm’s length. For quite a long time, the only parts of him I could touch were the left side of his haunches and occasionally his back and left side. Shoulders, neck, and his entire right side were strictly off limits, and by maneuvering his butt in my direction, he could pretty easily restrict my access to him.

Once he was wearing a halter on a regular basis, Owen would become a changed horse as soon as a lead rope was attached, allowing me to touch his shoulders, neck, and head from both sides. But getting that lead rope attached still proved difficult, even in his stall. Even with his halter on, I could spend 5–10 minutes working to catch him in his stall every time I wanted to work with him. It was time to teach Owen to stop pointing his bum at me. And to do that, he had to learn to yield his hindquarters, which essentially means stepping away with his hind end when asked to do so.

This was a pretty big concept for Owen to grasp, especially considering that I’d been permitting him to do the “wrong” thing for several months! So it took two or three sessions for him to get it…sessions in which I’d give him the command “Over!” while using various methods to encourage him to step away from me with his hind end. Keep in mind he was loose in his stall during these lessons, and I had to be very careful not to cause myself to get kicked (not that he ever offered to kick, but he’s still a horse after all!) I experimented with different ways to encourage that step away. Too much pressure would just result in him pushing right back at me. Poking him with the carrot stick seemed to have no effect whatsoever. Interestingly, I got the best results by pointing at his rump or pretending to use invisible energy emanating from my hands to move him over! Whatever the catalyst, any step in the right direction was rewarded with release of pressure and high praise! After I’d tell him what a good, good boy he was, I’d ask him if he understood. At first he’d just stare at me, but sometimes he’d lick & chew, and I took that to mean yes.

As I said, it took two or three sessions like this for the lesson to sink in. But with each session, I was able to catch him and attach the lead rope a little more quickly. Once he was caught, we’d head outside and practice yielding our hindquarters again, which was infinitely more easy with a lead rope and halter. Also, in addition to refresher work on leading, halting, and backing, we started working on lowering his head when asked. Owen is nothing if not consistent: with any new idea presented to him, he offers gentle resistance at first but when rewarded with a release of pressure and verbal praise just couple times, he says “Oh I get this!” and he’s got it. I am constantly telling him what a smart horse he is. 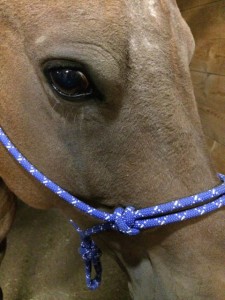 So, within a day or two of introducing the concept of yielding his hindquarters, I was able to walk up to Owen in his paddock, face him, say hello, and reach out and grasp his halter without a fuss. A few days of this, and I decided that Owen no longer needed to keep his halter on all the time. I must say, this was a pretty exciting realization to come to, because it took me nearly three months to get that halter onto him! And now, just three weeks later, I was taking his halter off, confident that I could put it back on whenever I needed to.

We’ve added a few more exercises to our ground work sessions. Yielding the hindquarters continues to be pretty easy for him, so today we started working on yielding the forehand. As with everything else, when I get one step in the right direction, I stop asking and make a big fuss. We’re also starting to make some exciting progress introducing lunging…at least when I ask him to go to the right. To the right, he’ll walk forward quite nicely. But to the left…well, we’re lucky to get a single step forward. Mostly he just stares at me, or moves backwards. But a single step is enough for now. When it comes to backing up, Owen is a superstar…he’s really easy to back up. He’s actually better at backing up than walking forward. But by far, his best exercise is the “following pressure exercise” where you loop the rope around his hindquarters so that you’re applying pressure from the opposite side? Owen did this exercise perfectly the first time we tried, and every time since then!

In case it’s not painfully obvious, I am pretty impressed with this horse! I’ve done some reading online about the Curly Horse breed, and I have to say seem like pretty remarkable horses! Smart, calm, sensible…not to mention hardy and healthy! I’ve learned that Owen is an Extreme Curly, which means that not only does he have a very tightly curled winter coat, he also sheds his mane and tail. Owen’s summer coat is actually fairly smooth with some amount of curl to it, which makes him look brindled. And I am sad to report that he has shed out most of his magnificent forelock, just a few curls remain. But he’s still awfully handsome!