Who doesn’t love a happy ending?

Here are SAFE we are so fortunate to have some great equine professionals on our team! Take for instance, Kim Lacy. Kim is a dressage trainer and rider who specializes in the Arabian breed. She is quite active on both the local Arab show circuit as well as in the Dressage arena, and she’s successfully trained many horses and riders through the levels at her beautiful dressage facility, Hidden Falls Farm, located in Arlington, WA. Kim herself has trained and competed through Grand Prix and has won USDF Bronze, Silver, and Gold medals, so it’s pretty safe to say that she really knows what she is doing!

So imagine our delight when Kim contacted us to say that not only did she want to foster a SAFE horse, she was willing to donate training for that horse at the same time! She saw it as a way to give back, and help horses that were not as fortunate as those living in her barn. Needless to say, this was an offer that we accepted right away,

The horse that we sent to Hidden Falls Farm was Ginger, a beautiful 9 year old Arab mare who was surrendered to SAFE when her owner could no longer care for her. Ginger had belonged to an elderly woman who’d taken her in as a 2 year old and kept her as a pet for the next seven years. When she had to go into assisted living, her family didn’t know what to do with her horse, and fortunately, SAFE was in a position to step in and help. Ginger was a nice mare, but she didn’t have a lick of training, so when we sent her to Kim, she definitely had her work cut out for her!

Terry was able to start Ginger down the right road with groundwork training, so when she left for Kim’s last September, her behavior was good and she was already accepting new things like grooming, bathing, and basic handling. But she still had a lot of anxiety and fear, which was understandable given how little she was handled for the first part of her life. Kim started working on Ginger’s confidence and trust through more ground work and lunging under tack before moving on to riding.  Happily, Ginger responding beautifully to Kim’s patient teaching and care. By December, she was cantering under saddle. Some things came a little slower than others — like steering –and Ginger had to develop the strength and balance to be able to correctly carry a rider,  but with slow, steady work, she made terrific progress under Kim’s guidance. Soon she was going solidly walk/trot/canter, going on trail rides, and working with other riders in the barn too. 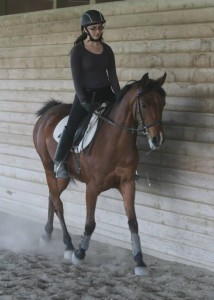 Ginger caught the eye of one of Kim’s students, Monica, as soon as she arrived at Hidden Falls Farm. Monica herself has been riding with Kim as her instructor since she was 8 years old. Watching Ginger change and blossom under Kim’s training over the past several months, Monica decided to try Ginger for herself…and we are delighted to announce that Ginger has officially been adopted by Monica! The two make a lovely pair together, and we can’t wait to see what comes next for Ginger and Monica. It’s wonderful to know that Ginger’s training will continue under Kim’s guidance, and that Ginger has found a home at Hidden Falls Farm where she has been so happy!

What’s next for Kim and SAFE? Rumor has it that a certain feisty little gray arab mare might be headed up to Hidden Falls Farm soon to take Ginger’s place as Kim’s next project horse. We’re keeping our fingers crossed that another happy ending might be in store for another deserving SAFE horse!

We’d also like to say thank you one more time to Dr Bob DeWard of Mt Rainier Vet Care who donated Ginger’s initial vet exam and helped us decide if she was a good fit for our program. Dr DeWard’s generous assistance was a big first step in upgrading this mare from a lonely life of leisure to the life of an adored and valued sport horse.  Thank you so much to Dr Bob and Julie DeWard for your incredible and well-appreciated support of SAFE!