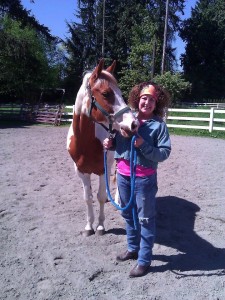 A very dear and special SAFE horse was just officially adopted, and we could not be happier about this match. Congratulations to Karen on your adoption of Zanadu!

Karen originally contacted SAFE in October of 2012. She was interested in Zan, but open to other horses. She wasn’t quite ready to adopt at the time, just starting to think about it. She and her husband had put an offer in a property, but the deal fell through. In January, she contacted us again. They had just purchased a property and she was still interested in Zan but had a barn and fencing to construct. Zan was on rest from her knee surgery in December. Fencing and barn were complete right about the time Zan was ready to start meeting potential adopters. Having shown Zan to dozens of potential adopters, we were cautiously optimistic. Karen, having been waiting to meet Zan for nearly 6 months, cried when she saw her “in person” for the first time. 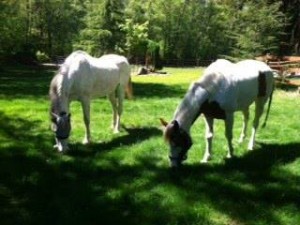 Zan has made herself right at home in the beautiful barn and pasture Karen constructed just for her. And Karen sings to her every day! Zan also has a new best friend, an older gelding named Raffy.