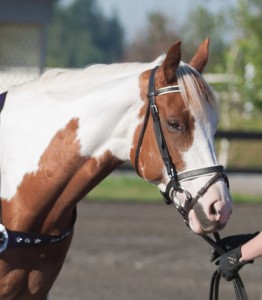 Zan’s been a SAFE horse since June of 2010, and she’s come a long way from the unhandled and underfed filly she was when we first met her. Restarted under saddle by professional dressage trainer Andrea Lucianna, Zan became a superstar riding horse — willing, easy, hard working, and so pretty to look at. Since graduating from training, Zan has been ridden extensively by select SAFE volunteers. She’s competed at several schooling shows in both Dressage and English Pleasure. She’s even been to the ocean. Through it all, she’s proved herself to be level-headed, teachable, and fun to ride.

But adoption has eluded our dear Zan…she’s come close a few times, but that perfect home that she deserves so much has never quite appeared. Looking at Zan with our eyes instead of our hearts, we understand what the problem has been. Zan has a slightly enlarged knee from a past injury. She’s always been perfectly sound, but we caution potential adopters that this young horse may end up facing arthritis and need joint injections and maintenance sooner than most horses. Unfortunately, that uncertainty has been enough to scare off her potential adopters.

Recently we showed her x‑rays to Dr Bryant at Pilchuck Vet Hospital and asked him for an evaluation. He told us that Zan had bone chips in her knee joint, and that she looked to be a good surgical candidate. The price quoted for the surgery was $2300–2800 — not a prohibitive amount of money, but certainly more than a horse rescue could justify paying for itself.

Enter the Adams family. Brenda and her daughter Krista were invited to SAFE Harbor Stables as part of our Directors Luncheon (tickets were auctioned off at the SAFE Horse Show). There they met Zan and heard her story…and immediately, they decided that they were going to help this horse. Yesterday, we got the joyful news…by combining a donation with matching funds from the Microsoft Workplace Giving Program, the Adams family — Mike, Brenda, and Krista — would be donating the entire amount needed to pay for Zan’s surgery!

So if you heard cheering coming from Woodinville yesterday afternoon, well, that was us, celebrating Zan’s good fortune and the Adams’ generosity! We’ll have more to share after we get Zan’s surgery scheduled and we know what is in store for her in terms of rehabilitation, but already we are looking forward to the day when we can announce that Zan is on her way to a wonderful new home and a wonderful new life, thanks to Mike, Brenda, and Krista Adams!!