A hard day to say goodbye

There’s no real way to properly express what happens when we lose a horse. Today, we said a too-early goodbye to Sapphire due to a colic.

Sapphire was discovered down in her stall this morning by her foster caretakers in deep distress. Dr Holohan from Pilchuck was called out, and Sapphire was tubed and medicated in an attempt to relieve her discomfort. Unfortunately her condition continued to worsen, and early this afternoon she was transported to Pilchuck Veterinary Hospital. She was down in the trailer when she arrived. Everything possible short of surgery was tried to give her a chance but her condition was declining very rapidly, and she was suffering. The decision was made to end that suffering and let her go. Sapphire was humanely euthanized at 3pm this afternoon.

It never gets easier when making the decision euthanize a horse. It plain sucks and is without a doubt is one of the most difficult things we have to do as stewards for the animals in our care. Today was one of those hard days. 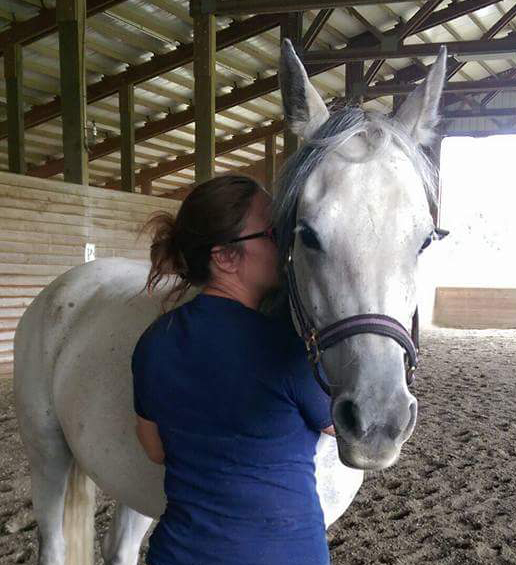 Today was a hard day. It was a hard day to say goodbye to a beautiful girl who against all odds had survived the inferno. It was hard holding my friend who had trusted enough in me to protect her, to help her accept humans back into her life, and today having to let her go. It was hard to watch the volunteer who had a special bond with Sapphire spend an entire day loving and supporting her, providing all the healing energy and strength she could, and in the end having to say goodbye. It was hard to watch a kind trainer who took Sapphire into her home, gave her friendship and taught her it was ok to let someone ride her as she made an amazing transformation, and today stand beside her in the final moments. It was hard to watch the woman who was on the rescue team that pulled her from the wreckage and took on chance on this mare to come stand by her side once again as she let go of a body that could not take any more pain.

Rescuing horses is not for the faint of heart. It takes tremendous amounts of courage by the people and the horses involved. All of the SAFE horses have incredible transformations, but I consider Sapphire’s remarkable.

Today was a good day. Sapphire was surrounded by those who loved her dearly – not alone or forgotten. She is at peace now, having known real love and kindness, and she will never suffer again. Sapphire’s ability to trust and let us into her life was a gift. Setting her free from pain was the last gift we could have given back to her. The day I met Sapphire I made her a heartfelt promise to never hurt her, always protect her and provide a safe environment for her to live. I was blessed to have earned her friendship, her love and her sweet nickers. Today, saying goodbye, I kept my promise and we were there for her until the end. We love you, sweet grey mare. We will carry you forever in our hearts. Thank you for your friendship and your trust.