From the Horse’s Mouth: Adoption? Do you know that thing?

Hello to all my friends! I have something wonderful to share with you, but first I have a question to ask: Adoption — do you know this thing? Adoption is when someone says “Oh horse! Please come to my home and live there forever. There will be lovely hays and tasty, tasty grain for you, and also friends and fields and little houses. I am a good peoples and I want you to be my horse!” That is the thing called Adoption, and that is the thing that has happened for me and Sinatra.

Me and Sinatra have been SAFE horses for a long, long time, and sometimes we thought we would be SAFE horses forever! But one day a nice man named Chris saw my picture on the Interwebs and thought that it would be nice to have a horse like me living on his big farm. He came over to meet me, and right away I liked him very much. Chris was very calm and quiet with me, and when I stood next to him I felt like yawning, and I did yawn many, many times. Chris and Mom talked for a long time about me, and Chris told Mom that he had a big ranch where I could live with acres of room to roam and lots of different animals to be my friends. Mom was very very sad to think about saying “So long” to me, but when she saw the yawning, she understood that Chris was someone who I could be happy with. She did not want to be in the way of me being happy, so she was brave and said that Chris could take me to his ranch and that would be my home for ever.

Now when Chris was meeting me, Mom told Sinatra “Oh Sinatra! You must be a very very good horse and maybe Chris will take you to his farm for ever and ever too.” But Sinatra did not listen to Mom, so instead of being a good horse, he was a very bad horse! He screamed like a goat every time he could not see me, and he banged and banged on the metal gate because he was too far away to be my shadow. He even escaped into the barn and helped himself to some tasty, tasty grain, and made Mom have to pull on him to get him back outside. Sinatra was a very bad horse the day that Chris came to meet me, and when Chris went home, Mom told Sinatra “Oh Sinatra! You will not be going to Chris’ farm with Honeycutt because you could not have been a badder behaved horse today.” Sinatra just said “Shoelace” and went back to being my white shadow.

But then Chris said something that made Mom and all the SAFE peoples cry a little with happiness. He told Mom that he didn’t think it would be right to take me away from Sinatra! He said that he could see that I am Sinatra’s rock, and that Sinatra would be very, very sad if I was to go away. So he said that he wanted to take Sinatra to his farm and that both of us would have a home for ever and ever.

So Mom put us in the moving box and took us to a place called Onalaska which is where our new home with Chris is. Our new home is a giant ranch that is so big that you cannot see all of the ends of it. The ranch is already home to many things called Cattles, and also the ranch is where bales of lovely, lovely hay come from! At first when we came to the ranch, I was quite startled by some very different sights and sounds and smells! There were a bunch of very ugly things in the barn that made scary gobbledy noises…Mom said they were Turkees, do you know those things? Turkees are giant birds that were up to no good, I think! I watched them from my new stall, and although I tried to be very very brave, there was a little quiver in my leg that showed how worried I was about Turkees.

Later when we went to explore the ranch with Mom and Chris and my friend Debi, I saw a giant black thing off in the distance called Bull, do you know THAT thing?! Bull was black and gigantic and when I saw Bull, I turned into a horse statue made of glass! Mom laughed and told me that Bull was very far away and would not hurt me, and eventually I changed back into a horse and then I could walk again.

My new ranch also many things called Cows and another big thing called Pig, and I keep a very close eye on all these things just in case they are up to no good, like Turkees.

Chris is my new Dad and even though it was me who he wanted to be his horse first, he has already formed a very good bond with Sinatra. He says that Sinatra is one of the sweetest and most lovable horses he has ever met! He even calls him a good little horse! Sinatra does like his new home very much, and seems to be calmer and happier than before. I still have to look out for him most of the times, but now he has two friends: me and Chris. Two friends is a very good thing to have.

I miss my old home and my old Mom, but I am very happy to have a home of my own that is forever with my new Dad and my new family. I can’t talk to old Mom as much anymore, but I can feel that she is still there taking care of my friend Jay and feeling love for me and for the Big Baby. She can’t see our bodies but she can still feel our hearts. Old Mom will always be part of my life even if I can’t see her every day. I know she thinks of me often, especially in the morning when she doesn’t hear me nickering like a foghorn for my breakfast. She misses me most of all at those moments. Sometimes I call for her in the morning from my new ranch home, and maybe she hears that in her heart, and gets out of bed to feed breakfast to my friends I left behind. That would be a nice thing, don’t you think?

Here are some pictures for you to see of me and Sinatra at our new home! 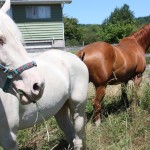 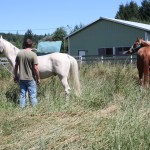 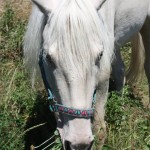 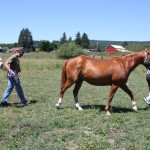 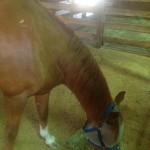 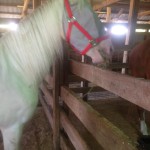