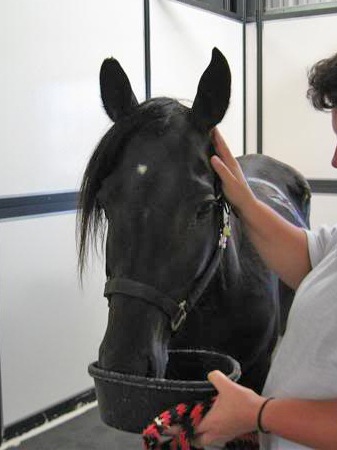 Ernie was a 13–15 year old black stud pony, rescued from a feedlot in Eastern WA. He was humanely euthanized in August 2005 due to an advanced case of a condition called HERDA. HERDA is a genetic skin disorder, most common in certain QH bloodlines, that causes the skin to literally detach from the body. Ernie was covered in old scars and open, infected wounds. Most HERDA horses are put down upon diagnosis at around 2 years of age, as there is no cure. That Ernie was allowed to suffer as long as 15 years, and the fact that he was possibly used as a breeding animal, is truly unthinkable. He also appeared to have never had his teeth or his feet taken care of. A skin biopsy was taken and sent to Cornell University after he was put down in hopes that it would lead to better testing methods to identify HERDA horses and help put a stop to its continued spread. Sadly, the AQHA refuses to acknowledge the disease as a genetic QH problem, even though it is almost exclusively seen in certain Poco Bueno lines. Sadly these horses continue to be bred and discarded.

Months after Ernie’s passing, we learned that a veterinarian at Cornell University named Dr. Nena Winand identified the genetic defect that causes HERDA and developed a test for it that is 100% accurate. Tissue samples from Ernie played an instrumental role in helping her with her research.