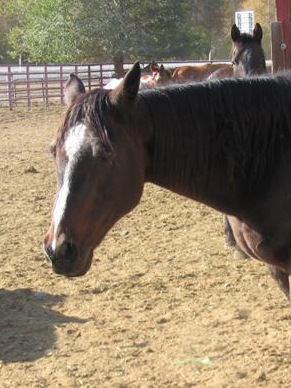 Mariah was a 15 year old Quarter Horse broodmare that was rescued from a feedlot in eastern WA. Upon her arrival at her foster home, it was discovered that Mariah had a severely injured and septic stifle, most likely due to an injury sustained long ago. She was in considerable pain, and the difficult decision was made to end her suffering by humane euthanasia. Mariah was a very brave and sweet mare that never should have been made to suffer like she did. She now runs free in the green pastures on the other side of the Rainbow Bridge.