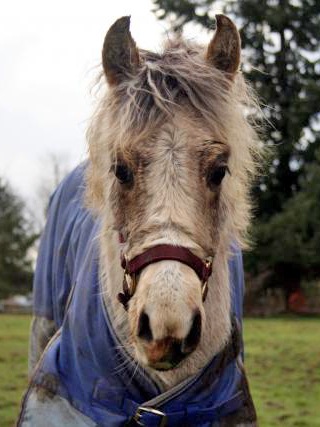 Lily was 6 months old when she was rescued along with her dam, Willow in late February 2008. Compared to the other young horses from the same large seizure, Lily was rescued in good weight and despite her large parasite load, she seemed to be thriving. She was a bright and happy filly, with a lot of personality. She seemed destined for a long and happy life.

But in mid May 2008, we noticed that Lily wasn’t acting like her normal feisty self. We discovered she was running a temperature of 104.5 degrees. Attempts to lower her temperature were unsuccessful and so Lily was admitted to Pilchuck Veterinary Hospital in Snohomish. Vets at Pilchuck discovered that not only did Lily have an infection, she also had an alarmingly low platelet count. Lily was suffering from an auto-immune disorder that was preventing her bone marrow from producing blood cells. She was placed in isolation and treated with steroids in an attempt to kickstart her immune system, but her body was just too ravaged from the effects of the parasite infestation caused by her neglect.

After 8 days with no improvement, it was decided to let Lily go. On May 24, 2008, she enjoyed a walk in the sunshine and a belly full of grass and clover before she was put to sleep. Lily was loved deeply by many people and she was badly missed. Losing a horse this young with so much promise was absolutely heartbreaking. Our only consolation was the fact that her abuser was sentenced to nine months in prison, and for that we thank King County Animal Control for their hard work on this horrible case.