We had a fantastic and busy weekend at SAFE!  Spring is here, the sun finally made an appearance, and the horses are all busily shedding.  I’ve been remiss in posting for a little while, but as usual things have been moving along quickly at SAFE.

This weekend we had Dawn Anderson who owns Anderson Equine Saddle Fitting Services and her assistant Jean, who is studying to become an equine masseuse, out at the farm.  Dawn contacted us recently offering free fitting services for the rescue horses and also is interested in putting together a saddle fitting lecture/clinic fundraiser for us!  I was so excited when she contacted us, because as a dressage rider myself I know how important a well-fitting saddle is to making the horse comfortable and happy in his work.  I also knew how valuable this offer was and we immediately jumped on it and she was able to work us in within a couple of weeks.  She came out on Saturday and spent most of the day with us.  I was incredibly impressed with her kindness, thoroughness, and professionalism.   We pulled out our collection of personal and donated dressage and hunt saddles and pads then brought out each of the horses that were getting ridden.  Each horse she worked with — which included Dexter, Annie, Zanadu, and Deeds, started out with an in-depth assessment of their conformation and checking for any sensitivity from head to tail that might indicate a saddle fitting issue or pain-related compensation.  Each horse then had a file created for them and was measured on 5–6 areas along their back using a flexible rod which were then traced on graph paper.  Then, she had the horse be led in a straight line away and back from her at a walk and trot and made notes about how the horse travels, noting such things as dropping a hip or swinging a leg wide.  Then she had us lunge the horses free without tack, to make note of their natural motion free from anything on their back.  Next, she went through the saddles and various pads and cushions we had available and made suggestions on which saddle was closest to the ideal fit.  She picked what appeared to be the best choice, then girthed the horse up without any saddle pad and lunged the horse again, looking for any changes in the horses movement, any shortening of the stride, tension, or grouchiness that could indicate the saddle was interfering or pinching the horse.  Lastly, she watched the horse being ridden to see if there were any significant changes with the weight of a rider.  She was incredibly thorough and also was able to give us valuable advice about proper saddle placement and showed us some tricks as to how to check for proper saddle fit ourselves.  The biggest improvement was with Annie, as Dawn showed Allison how she should put the saddle back much further on Annie’s back than she had been putting it.  When Allison rode Annie, there was a big difference in her way of going and Annie was immediately much freer in her shoulder and less fussy with her head and neck.  It was really a very small change, but for a sensitive horse like Annie, it made a huge difference.   Dawn also was very complimentary of SAFE and our horses and said she was very glad to see that none of our horses had any major soreness issues.  Dawn is going to come back and reflock a couple of our saddles for us, and also showed us how one recently donated saddle that we had hoped to sell was unusable due to the stitching being worn through.  I was so impressed by Dawn and Jean and so excited that she is willing to offer this clinic/fundraiser for us, as I am hoping there will be a lot of interest in this as it will have a lot of value to the horse community.  We are hoping for a weekend in May for the event, so stay tuned!  Some photos below: 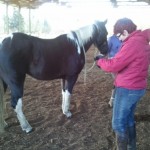 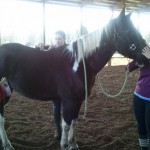 Dexter gets his measurements taken by Jean 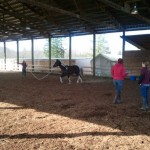 Dawn and Jean analyze Dexter’s movement on the lunge 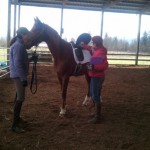 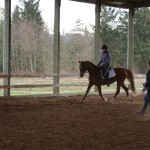 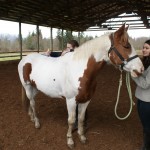 Zanadu getting her measurements taken 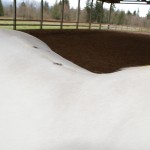 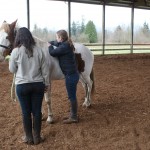 Zanadu gets her measurements taken 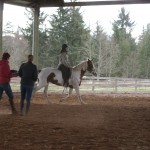 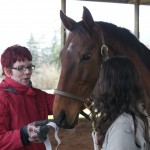 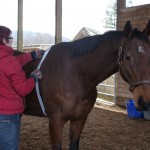 Deeds was a model citizen for his measurements and weight-taping

I am thrilled to announce that Baxter’s adopter has been approved and he will be leaving for his new home next weekend.  Congratulations to Mandy K. of Yelm, WA on her adoption!  She is a great match for Baxter and he will be continuing in his dressage training.

Charmeon will be coming to SAFE at the end of the month.  She has progressed well in her training and is now being ridden out of the arena and on trails.  I can’t wait to meet her, she looks like such a fancy big mare!

Corona is doing fantastic and today I moved him back to SAFE.  He has really filled out but still has a few more pounds to go, and today I took bucketloads of hair off of him which had to have felt good!  I also got to experience for the first time “penis-duty”…his penis still has to be cleaned and have medication applied daily.  He was very good about it…in fact he even enjoyed it a bit.  It is healed well except for the bottom third of it.  It was kind of an icky job, I removed a lot of scabby crusts and then it was a little bloody and raw, but I think it bothered me a bit more than it bothered him.  I’m sure I’ll get used to it!  He’s such a sweet horse though!  I also got to meet his former owner that had him from the time he was 3 until he was 7, as well as the girl who leased him from the owner during that time.  They both came down from Canada to visit him and told me a lot about his history.  He hasn’t shown all that much, actually, just a couple of times in the jumpers and once in the hunters.  But he loves to jump and will jump anything, but they did warn that he can get pretty strong!  He hasn’t had much dressage training or been jumped cross-country, just mainly stadium.

Our two senior horses that came from King County Animal Control are doing well.  They are now out on pasture and very happy.  Neither of them can eat hay well, so they are on a mostly mush diet, but they are both gaining weight and doing well.  The gelding did have some abnormalities come up on his bloodwork so we will be rechecking that soon, and the mare is scheduled to have a tooth extracted soon which hopefully will help with her ability to eat.  I am still waiting to hear back from the county on the status of the case, and hopefully will be able to post more pictures and updates soon.

We also took in a new horse today.  We have named him Romeo, and he is a 6 year old Hackney stallion.  I’ll start a new post about him with pictures shortly.  He is coming to us as an owner surrender, after being abandoned on a property two years ago.  Sadly while being in very good condition, he has an old injury (reportedly from birth) which will make him unridable.  He seems to get along well on it, and hopefully he will be able to be a good family pet once he is gelded.  He is SUPER cute (bay and white pinto) and has excellent manners for a stallion.

Lastly, I hope that if you haven’t already, you will consider making a donation to our Lucky’s Charm fundraising campaign to raise money for Lucky’s much-needed surgery as well as to help out WorldVets, an organization that is working hard to help animals that were affected by the Japan earthquake and tsunami.