It’s been a busy few weeks at SAFE, with several events completed (Pins for Ponies, Saddle Fitting Clinic) and several events upcoming (Lipizzaner show which is SOLD OUT, Gelding Clinic June 4th, Open House June 26th).  We are working diligently on planning for the 2011 SAFE Benefit Show (our 5th Show!) which this year will be expanded to a two-day event August 6–7th at Donida Farm.

A great update for you on April!  Dr. Hannah has worked her magic and the wound is now completely healed.  She is off antibiotics and doing great!  There will be a scar there, but once she gains some weight she will be ready to be made available for adoption!

Lucky is also doing fabulous! He has graduated to turnout in the round pen which he is quite happy about.  He tolerates stall rest very well, but he’s a young, active horse with a lot of energy, so actually getting some time to stretch his legs makes him much more sensible.  He will be ready to come back to our main facility in another week or two.

Mr. Pibb is doing well, gaining weight and out on a big pasture which he has all to himself.  He’s a nice, sweet horse and is going to look so much better once he is fully recovered.  He got a dental float this week which should make eating hay a bit easier for him — his teeth were very, very bad.  Poor guy!

Dawn Anderson’s assistant Jean is also an equine massage student, and she offered to come and work on the rescues for us.  She came out the first time on Sunday and worked on Deeds and Romeo, and then came back on Monday and worked on Annie and Zanadu.  Annie reportedly LOVED her massage.  Romeo was a little unsure about it at first, and then he decided he needed to groom me while she massaged him, it felt so good.

Zanadu’s potential adoption unfortunately fell through.  Some concerns over her soundness in her right knee were raised by the vet which caused the adopter to back out of the adoption.  We had Dr. Hannah out the following week to further evaluate her knee, which is slightly larger than her left.  Dr. Hannah saw no lameness on the lungeline, but she did show a mild, Grade 2/5 lameness with flexion.  She took some xrays and conferred with Dr. Bryant at Pilchuck.  The xrays show a bone chip as well as an area of arthritis.  This will probably cause her some soreness at some point in the future and require some maintenance (joint supplements, Adequan, joint injections) to keep her comfortable.  She’s not going to be a jumper or do anything super strenuous, and potential adopters should be made aware of the issue, however she is still fine for low-level dressage, flatwork, trail riding, pleasure riding, etc.  Dr. Bryant did say that the arthritis was in an area where surgery to remove the chip and clean up the joint could be an option to give her a little more time before she would need joint maintenance, however as she is sound now that is not an option that SAFE plans to pursue for her.  Dr. Hannah also flexed her left hind leg which has the old barbed wire injury on it, but she showed no positive response to flexion on it and it does appear to be superficial scar tissue only.  Photos of her knee and left hind pastern below. 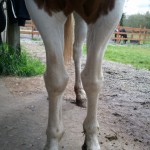 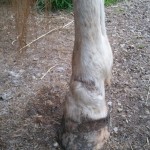 Unfortunately, I have some very sad news to report on Romeo.  A couple of weeks ago he left NWESC and returned to SAFE.  The first several days he was pretty agitated as he was still very studdy and we were working on acclimating him to other horses.  That part has gone well and he has finally settled and is very calm now and learning to get along with his neighbors and not attack the fenceline if horses go by his paddock.  Unfortunately — at some point — either during the move or shortly after, he has further injured his already severely compromised hind leg.  When he was at NWESC, he was getting around very well on that hind leg — was sound at the walk and about a 3/5 lame at a trot.  But once he settled in at SAFE, he was quite a bit lamer than that.…not wanting to bear weight on the bad leg, sometimes holding it in the air, and really, really gimpy at the walk.  I had hoped that he had stressed himself in his excitement of being in a new place and pacing, but after he settled and days went on and he did not improve, I began to worry that something far more serious was going on with Romeo.  I put him on Equioxx, an anti-inflammatory, first once a day, and then twice a day, and even then he seems very sore on the leg.  He also is not eating very well, and generally does not seem very happy.

Tonight Dr. Hannah stopped by to see him.  She agreed that he was far worse than he had been at NWESC and was pretty severely lame.  She also confirmed what I had thought as well — the leg itself looks more angled and less stable than it did before.  She took xrays just to compare to the previous films as she wanted to see if he did indeed further damage it, but we both agreed that it is now compromising his quality of life, and he will unfortunately have to be put down.  This is of course a very hard and sad decision to make, and if we had known this would have happened we never would have put him through the stress of being gelded.  Because we do believe he is uncomfortable, we are going to try and schedule this soon — possibly on Thursday evening.   Once again I feel anger that Romeo’s original owner did not put him down when the injury happened, or had had it fixed surgically if that was possible.   I wish there was more that we could have done for him…he is such a sweet, sweet horse.  His life could have been so much better.